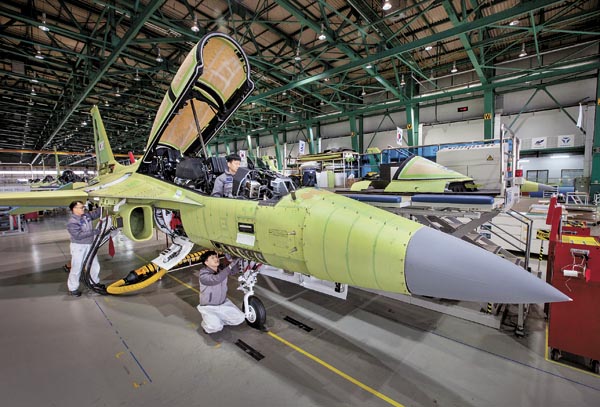 SACHEON, South Gyeongsang - When Korea faced an economic crisis in the mid-1990s, making profit by developing aircraft was considered as a flight of fancy as most local manufacturing businesses were struggling to survive.

Under unlikely circumstances, the Korea Aerospace Industries (KAI) was established in 1999 by the government as part of its drive to foster a high-value added industry.

On a recent visit by the Korea JoongAng Daily to KAI’s production plant in Sacheon, South Gyeongsang, employees were working feverishly on the company’s next project, which will make it the world’s sixth-largest aircraft and parts manufacturer. 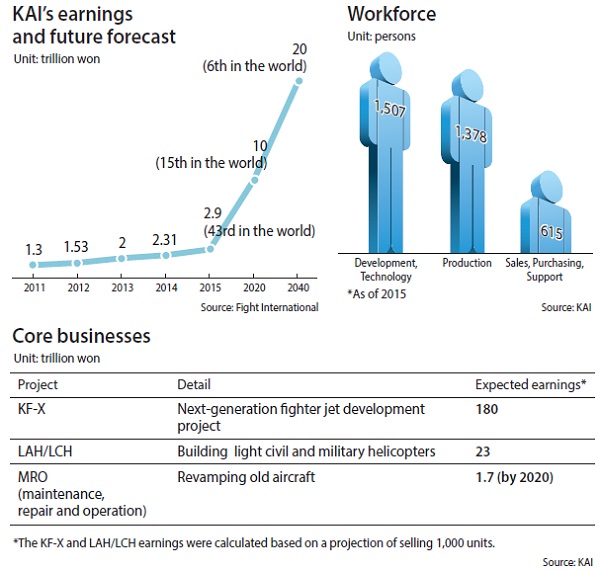 The loud sound of nuts and bolts being drilled into metal filled the enormous hangar, which was about the size of three football fields. The workspace was immaculate and could be compared to the repair shop of a smart car manufacturer like BMW. KAI’s production plant and other business offices, as well as research labs, are located on about 948,760 square meters of land. About 600 engineers currently work at the production plant.

“When you make a jet such as the FA-50, we don’t weld body panels like people generally think. Every single panel is assembled by hand, while some work is managed by our Auto Drilling System Simulator, where robots drill bolts and nuts for parts that people cannot get to,” said Lee Jae-yoon, the manager of KAI’s Production Division.

“If we weld the exterior body, there’s the possibility a part of the body may get ripped off, no matter how big the size of the scratch made by an opponent’s attack. But if a part gets damaged, that part shouldn’t damage others,” Lee said.

He added that about 4,000 nuts and bolts are used for grafting body panels alone, while more than 300,000 pieces are needed to completely develop one fighter jet.

In the plant, aircraft such as the supersonic training jet T-50 and mobile helicopter Surion are under development along with the FA-50, which is 9.45 meters (31 feet) wide, 13.14 meters long and 4.94 meters high. Building one FA-50 takes a year and costs about 30 billion won.

In the area known as the “back shop,” the company produces parts for aircraft like the Boeing 787. About 100,000 parts are produced in the back shop each month in cooperation with about 40 to 50 partners. The company also makes wing parts for Airbus.

“In order to make a wing for the [Airbus] A350, a total of 66 pieces of wing ribs are necessary to build the frame of a wing,” said Kim Byung-joo, the senior manager of Detail Manufacturing Team I. “This is an automated factory that people often call a ‘smart factory,’ because only 24 people are necessary to manage the entire workload on a three-shift basis.”

He added that the wing-rib business sees about 150 billion won in revenue per year.

KAI is also working on a maintenance-repair-operation (MRO) business, where old aircraft can be revamped and upgraded for sale. The company expects to make 1.7 trillion won in revenue in the MRO business by 2020.

The company upgrades products such as the CH-53E Super Stallion, the heaviest helicopter previously owned by the United States.

“Since we are trying to localize most of our parts and technologies, we expect the overall profit structure to improve even more in the future.”

KAI’s debt ratio once hit 680 percent in 2000 due to failures in many businesses, but after carrying out a painstaking restructuring that included cutting hundreds of employees and freezing salaries, the company rebounded with financial support from its allies, including the Korea Development Bank, a major shareholder, which increased its capital by 120 billion won.

Today, after overcoming economic hardship, the company reported 2.9 trillion won of revenue last year, a 26 percent rise from the previous year, and an operating profit of 285.7 billion won, a 77 percent rise year-on-year - all of which were all-time highs.

“Such achievement came as we successfully shifted our business territory from domestic to exporting market,” CEO Ha Sung-yong said in January’s Investors Relations.

Ha aims to beef up the export market even more by winning the bid to build 350 advanced-trainer T-X jets for the United States, which will give the company about 9 trillion won in revenue. “We will do our best to win this project and I think our experiences of making similar jets such as T-50 will appeal to the U.S,” said the CEO. “It will be a new take off for Korea’s aerospace industry.”