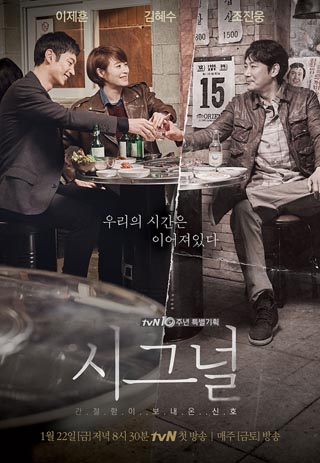 
The recent megahit tvN drama “Reply 1988,” which came to an end last month, was one of the few cable dramas that made fans stay home on Friday and Saturday nights. It broke the viewership record for cable shows, finishing with a rating of 19.6 percent.

And that level of success is bound to put pressure on the producers of a new drama series that took over the time slot.

Before the first airing of tvN’s new drama “Signal,” producer Kim Won-seok said he felt a heavy weight on his shoulders. But when the first episode aired on Jan. 22 and captured a viewership rating of 5.415 percent, Kim let out a sigh of relief. His heart-pounding crime thriller series instantly became the talk of the town and the ratings began to increase, reaching 7 to 8 percent for the eighth episode.

In “Signal,” the main characters use an old two-way radio that connects the past to the present. A dogged profiler named Park Hae-young, played by Lee Je-hoon, pairs up with a detective named Lee Jae-han, played by Cho Jin-woong, from 20 years ago, trying to get to the bottom of unsolved cases from the past. This eerie mystery drama captured the public’s interest instantly, especially by using actual unsolved cases. 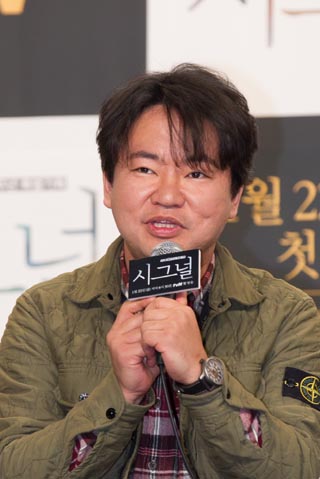 And Kim, who already showed off his production ability in the successful office drama “Misaeng” (2014), is once again working his magic.

“I feel grateful when I hear that ‘Signal’ also has detailed and sophisticated direction, but I always place emphasis on the people,” Kim said, explaining that his philosophy lies in always prioritizing the characters.

To learn more about the new drama, Ilgan Sports, an affiliate of the Korea JoongAng Daily, sat down with Kim for an interview. Here are edited excerpts.

Q. “Signal” is attracting more viewers every week, with the ninth and 10th episodes coming this weekend. You are still filming the drama as well, right?

A. We have completed shooting up to the 10th episode, and for episode Nos. 11 to 16, we are shooting them at the same time depending on the locations. As the drama involves a time warp, going back and forth from the past to the present, it is more efficient to shoot everything in one location than to move on to the next.

It must have taken a long time for you to study the screenplay, as it involves a time warp.

It was time-consuming and quite costly as well. But I couldn’t prepare for that long. When the production of “Signal” was decided last May, I studied the screenplay thoroughly with Kim Eun-hee, the screenwriter. I only began shooting last October and only spent about three months studying it.

I heard you got a lot of advice from a real profiler. Is that right?

Luckily, I got to know the first female profiler in Korea. She also worked for seven years as a police officer before becoming a profiler, so she was a great help, from touching up the screenplay to selecting props for the set. When I was filming “Misaeng,” a real office worker from Daewoo International was at the site to advise me. I think I was able to produce a detailed outcome thanks to these advisers. I think it is crucial to listen to such real advice for any kind of drama series. That’s how you get a quality outcome that includes professionalism.

Real cases such as the “Southern Gyeonggi murder” are being addressed in the drama, reminding the audience that these cases took place. That is also one of the appealing points of the drama. Do you have a standard for picking the cases?

I talked about it with the screenwriter. We decided to develop the story around real unsolved cases that many people are familiar with, such as the so-called frog boys case and kidnapping of Lee Young-ho, or the Hwaseong serial murder case. These cases, we believe, should not be forgotten by the public.

Although they are not unsolved, we also wanted to deal with major incidents that took place in the past, such as the collapse of the Seongsu Bridge in 1994 or the major building collapses that took place in Korea. These incidents were not natural disasters but were man-made. No one was really held responsible for such painful disasters back then, as it was said it was difficult to hold a specific person accountable. In my view, such disasters are also unsolved. I wanted to talk about all the crimes for which the actual offender wasn’t held responsible.

Not only that, back then, capturing the wrong person as the offender to quickly close the case was frequent. The reason why I included such cases in the drama is because I want people to never forget about them and to remind them that they should never happen again.

What other efforts are you making to enrich the quality of the drama?

I’m not an expert in depicting the criminal genre. One of the things people get excited about when watching such a drama is inferring what happened and who the real criminal is, but what I wanted was for people to stand out. I tried to focus on putting the emphasis on people, on top of the exciting inference part. I wanted to show scenes that could make viewers cry. Some may criticize me for sensationalizing and creating tear-jerking dramas, but I personally believe dealing with the families of victims can never be called tear-jerking.

That is why I tried to look at the cases from the victims’ perspective. I tried to show that in all aspects, from the acting to using props from the 1990s, to add a sense of realism to it. Because this drama has a fantasy element of this walkie-talkie that links the past and the present, other things surrounding it need to be extra perfect and realistic.

Some have criticized Lee Je-hoon’s acting as hyperemotional and unrealistic. What is your opinion on that?

Koreans regard realistic acting as the best acting. They want genuinely emotional scenes that come out from the actors’ acting. If the actors suddenly sing in the middle of their dialogue or have lines that are unrealistic, viewers instantly become resistant. It is not Lee Je-hoon’s acting; anyone who would have been cast to play this profiler Park Hae-young would have looked somewhat unreal. The profilers we are familiar with are usually cool-headed and rational.

But Lee’s character in “Signal” doesn’t have that characteristic. He became a profiler due to a painful incident he experienced as a young boy. He’s an emotional and sensitive character. Such an emotional person trying to carry out the work of a profiler is bound to look dynamic. The actor playing this character needs to use a lot of muscles in his face and show diverse feelings. In that sense, I have no problem with Lee’s acting. Of course, there is no director or actor who can be perfect.

So you think Lee’s acting is turning out just the way you thought?

I don’t know what defines “good acting.” Even veteran actors don’t evaluate their acting as “good acting.” I think the problem is with the director. Actors give the best they can. If there is criticism on the acting skills of an actor, it is the director’s fault. As soon as talk started going around about Lee’s acting being too unrealistic, I tried to accept that it could appear that way and studied the character a bit more. But as for Lee, as the character himself has his own personality that I wanted to depict, I want the viewers to understand that.

What would you say the most interesting points of this drama are?

Crime investigation stories are usually difficult to follow when you start from the middle of the series. But for “Signal,” because it deals with various episodes within the drama, it would be easy for latecomers to join anytime.

Moreover, I hope viewers will think about the moral lessons we can learn as the characters solve these unsolved cases from the past. From this week, the three protagonists will delve into a bigger case, and one of the detectives will become the victim. This episode will show why these actors had to be cast to play the corresponding characters in “Signal.”