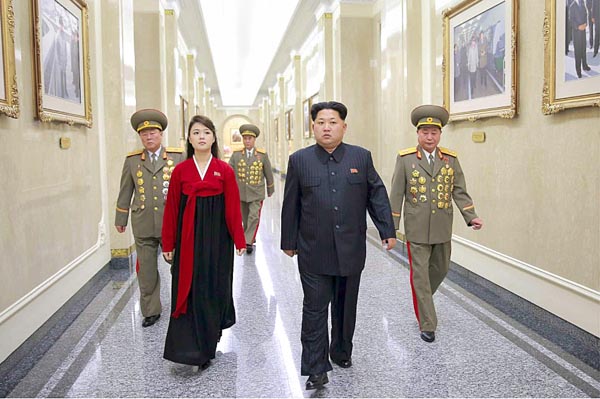 North Korean leader Kim Jong-un paid tribute to his late father Kim Jong-il with only his wife by his side on what would have been the former ruler’s 74th birthday, the country’s state-run media reported Wednesday.

This is the first time the young Kim has visited his father’s resting place unaccompanied by officials and aides, a move that is likely indicative of his efforts to consolidate his power.

The official Korean Central News Agency (KCNA) said Kim, 33, and his wife Ri Sol-ju visited on Tuesday the Kumsusan Palace of the Sun, where the bodies of both his father and grandfather, North Korean founder Kim Il Sung, are kept, to mark Kim Jong-il’s birthday.

The occasion marked the first time Kim has independently visited the palace since taking over power in December 2011.

Last year, he and other top North Korean officials paid their respects there at midnight on Kim Jong-il’s birthday.

“It is highly likely that it was a calculated move to demonstrate that Kim Jong-un has successfully consolidated his power and has stabilized his regime,” said Nam Sung-wook, a professor in the Department of North Korean Studies at Korea University.

His visit comes a day after South Korean President Park Geun-hye warned in a nationally televised address to the National Assembly that the regime would only speed along its “collapse” if it did not abandon its nuclear development aims.

Tensions have risen on the peninsula following North Korea’s fourth nuclear test on Jan. 6 and subsequent long-range ballistic missile launch on Feb. 7 that resulted in the shutdown of the Kaesong Industrial Complex, the last remaining vestige of inter-Korean cooperation.

Both countries have since strengthened their military readiness posture.

South Korea raised questions Tuesday about Kim Jong-un’s whereabouts after the KCNA released a list of people who had paid tribute to the late Kim Jong-il at midnight that day. The North’s young leader was not included on the list.

His consistent appearances and disappearances have caught the attention of North Korea observers, particularly because Kim has had a history since coming to power of purging and executing senior officials.

Sources familiar with North Korean affairs believe Ri Yong-gil, the chief of the North Korean Army’s general staff and the No. 3 man in Pyongyang, was most recently executed on charges of corruption and factionalism.