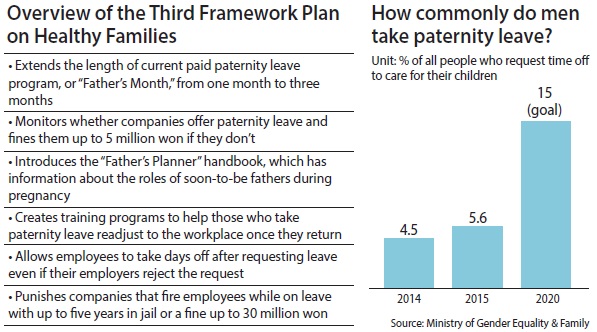 When Mr. Bae, 34, and his wife welcomed a baby boy last year, he wanted to take paternity leave. Bae’s wife had injured her wrist and needed help around the house, and since he had been working at the same company for five years, he felt as though he had earned the time.

But due to fears of being ostracized by the other men in his workplace, Bae only took four days off after the birth.

“My boss is a woman, and she takes great care of me, but I found out that no male in our office had taken paternity leave, so I decided to forget about it as well,” Bae said.

The rate of men taking time off to care for their children is far behind that of women, accounting for 5.6 percent of the total last year. The government said it plans to raise the rate to 15 percent by 2020.

To make that happen, 14 government ministries, including the Ministry of Gender Equality and Family, the Ministry of Health and Welfare, and the Ministry of Employment and Labor, came up with their third Framework Plan on Healthy Families on Tuesday.

According to the Ministry of Employment and Labor, 53.2 percent of 1,000 local companies with more than five full-time workers currently offer paternity leave,

The government will fine companies up to 5 million won ($4,060) if they do not allow men to take leave when they request it. Companies that fire someone while they are on leave can face up to five years of jail time or a fine of up to 30 million won.

Additionally, the government will help local companies expand a program called “Father’s Month,” which grants paternity leave and a stipend of 1.5 million won per month to an employee whose spouse has already taken maternity leave to care for an earlier child. The government plans to increase the stipend to 4.5 million won and extend the period to three months starting this year.

The government currently gives 200,000 won to employees who work at small and midsize companies when they have a child, but will consider raising it to 400,000 won by 2017.

The government will also subsidize local companies that adopt a new program that allows employees who have recently had a child to work flexible hours without having to take an official leave for up to two years.

Over half, or 51.1 percent, of people who take leave after having a child quit their job within a year of returning to work, according to the Korea Employment Information Service, and a number of government branches will run training programs to help them get used to the working environment after coming back.

The government will also revise rules and regulations to allow employees who request childcare leave to take days off if their employers reject the request without a reasonable explanation.

The government will run various educational programs, from teaching how to give first aid to babies to improving communication with children. It will give out “Father’s Planners,” which have information such as what roles soon-to-be dads should take on during their spouse’s pregnancy.

“It is necessary for both men and companies to cooperate in order for family and work to have a compatible relationship,” said a representative from the Ministry of Gender Equality and Family.

The ministry said it will give benefits to conglomerates if they open their day care centers to affiliates and strategic partners.

However, many experts worry about whether these plans will be as effective as hoped.

“The government’s actions will have limited impact in Korea,” said Kim Jin-soo, a social welfare professor at Yonsei University. “We are even seeing the age of voluntary retirement go down right now. Local companies will have a very hard time cooperating with the government’s plan.”

Kim Yeon-myung, a social welfare professor at Chung-Ang University, also argued that the plan seems unrealistic unless accompanied by a fundamental change in Korean work culture.