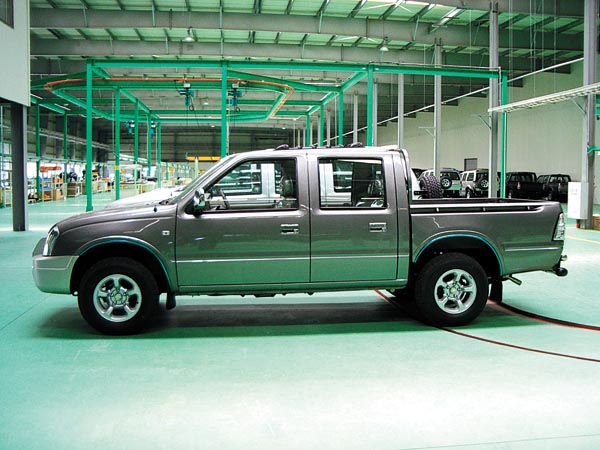 One indicator of the economic growth in a country is the number of automobiles it has.

And in North Korea, analysts say, the number of automobiles appears to be increasing by some 10,000 vehicles per year, amounting to about a total of one million.

The expansion of the distribution market and an increase in individual income are some of the factors contributing to a raising demand for cars in Pyongyang.

North Korea’s automobile industry has actually stagnated for a long time. After the mid-1990s, due to a lack of manpower and a shortage in materials, automobile production drastically decreased.

But the industry has regained some of its vigor recently because of an active market place and increased collaboration with China, which in turn has expanded the volume of traffic to and from major cities.

The Associated Press reported on Dec. 10 that traffic in North Korea’s capital “has gotten visibly heavier over the past year or so,” with more trucks, taxis, passenger cars and other vehicles on the roads, “giving the often empty-seeming city of roughly 2.5 million a much more lively look.”

There are five companies in North Korea involved with China in joint venture projects to manufacture cars. Chinese car parts are imported into North Korea, where they are assembled. The manufactured cars are mostly for domestic use, while some are exported back to China.

Pyeonghwa Motors, an automobile venture between North and South Korea established in 1998, handed over management rights to Pyongyang in 2012.

The business was founded by the late Rev. Moon Sun-myung, the chairman of Tongil Group and the leader of the Unification Church, and was authorized by the Ministry of Unification in 2000 as an official economic partner of the North Korean regime.

North Korea offered land for a factory in 1997, and the company started operations in 2002, with investment from the Unification Church and the regime. At the time it was founded, Tongil Group held a 70 percent stake, while the North Korean regime held 30 percent.

Pyeonghwa Motors currently brings in auto parts from carmakers in Liaoning Province in northeastern China, such as Jinbei in Shenyang or Huanghai Auto in Dandon, and produce passenger cars, vans and sport utility vehicles (SUVs).

Demand has also increased as its trade market develops for dump trucks, cargo vehicles and buses.

Last year, North Korea agreed to establish its first cargo truck company as a joint venture with China some 1.5 kilometers away from the Pyongyang Railway Station. North Korean leader Kim Jong-un was said to have a particular interest in the project.

The investment amounts to some 10.8 billion won ($8.7 million) and the business currently produces cargo trucks and minibuses.

However, North Korea’s fourth nuclear test in January and subsequent missile launch earlier this month could change all that.

Last week, the U.S. House of Representatives and Senate passed a bill that would enable secondary boycotts that could affect joint venture projects between North Korea and China, and thus significantly impact the North Korean auto industry. President Barack Obama is expected to sign the bill into force.

Chinese companies with the potential to do business with the United States are also worried the new sanctions could harm any future prospects and hinder North Korea’s ability to produce cars - especially since 90 percent of its auto parts come from China.

“North Korea’s demand for dump trucks, cargo trucks and buses has increased by about 10,000 vehicles annually,” said a source with a Chinese company based in Dandong involved in the joint truck venture with North Korea.

“We’re in a wait-and-see situation where we do not have business with the United States yet but are concerned that we may face disadvantages in the future.”

Cho Bong-hyun, a senior researcher at the IBK Economic Research Institute, said there would be no issue if Chinese companies were only aiming for a domestic market.

“But if it enters the U.S. market or if there are transactions with U.S. banks, they could suffer serious damage,” he said.

North Korea only has three factories capable of producing their own vehicles, including the Sungri Motor Plant, which dates back to 1950. It has the capacity to manufacture 30,000 automobiles, but in reality has halted most production.

“North Korea does not have a factory that has the capacity to produce its own automobiles,” said a Kotra official, “so if it doesn’t get properly supplied with auto parts, it is in a situation where it will find it difficult to be able to assemble and operate them in a timely manner.”