Scenic view of river comes at a high price

Scenic view of river comes at a high price

Living along the Han River has its obvious attractions with scenic views along the waterfront and access to well-managed parks and recreational facilities.

But there is a high price to pay for residents who manage to get one of the coveted apartments on or near the river which is lined with pedestrian walkways, bicycle paths, public parks and restaurants.

According to Budongsan 114, a real estate information provider, in the country’s top 10 apartments by their price, excluding those that are in the process of reconstruction or redevelopment, nine of such apartment complexes can see the Han River or are located close by. 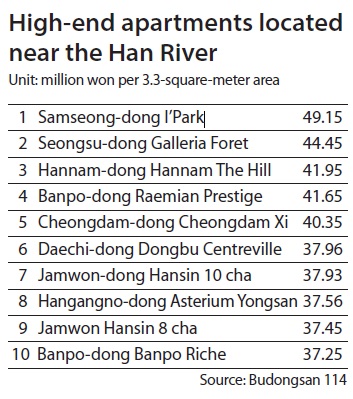 He wanted to move because his son has been admitted to a private high school in the greater Seoul area and he had no need to live in Daechi-dong, which is well known for popular private tuition institutes.

“I wanted to find a new apartment where I could live comfortably without having to undergo huge changes in my lifestyle,” Kim said. “Although I didn’t get the apartment due to strong competition, I will continue to apply for apartments that are constructed along the Han River.”

According to Budongsan 114, the only apartment on the top 10 list that wasn’t along the river that flows through the nation’s capital was Dongbu Centreville in Daechi-dong. It ranked sixth.

The other apartments on the top 10 lists other than Dongbu Centreville in Daechi-dong were also located near the river, where 3.3 square meters of space went for more than 20 million won.

The trend can also be seen in sales of pre-construction apartments.

GS E&C last month started to accept applicants for the sales of new Banpo Xi in Jamwon-dong, southern Seoul. Although the 3.3-square-meter area was being sold for 42.9 million won, the competition on average was 38 to 1.

The situation was similar for Acro Riverpark in Banpo-dong whose 3.3-square-meter area was being sold for 41.3 million won. In December 2014 when the company started to accept buyers, the average competition was 17 to 1. Later, the competition for the most popular apartments went up as much as 169 to 1.

The common attraction of Banpo Xi and Acro Riverpark is that they are both located near the Han River.

Interest on high-end apartments along the river started to surface in the late 2000s when then-Seoul Mayor Oh Se-hoon in 2006 announced the river’s renaissance project.

The project led to the construction of high-quality apartments along the river. Galleria Foret, Hannam The Hill, Raemian Prestige, Cheongdam Xi, Asterium Yongsan and Banpo Xi all started pre-construction sales in the late 2000s.

“Although the real estate market has been frozen, these apartments enjoyed strong popularity even despite the expensive pre-construction sales price largely thanks to the great view of the Han River,” said Lim Chae-woo, real estate specialist at Kookmin Bank. “As tenants started to move in since 2010, the high-end apartment market trend has been shifting.”

Another reason for the riverside popularity is that interest in traditionally rich neighborhoods has been withering. Daechi-dong and Dogok-dong became the most popular neighborhoods largely because of the schools in the area where many of the graduates went on to leading universities.

“The attractiveness of the so-called Gangnam eight school districts [mostly meaning Daechi-dong and Dogok-dong] has been losing its appeal due to changes like the rising popularity of autonomous private high schools [which receive no government funding] as well as the changes in the college admission,” said Kim Jin-seong, a realtor in Bangbae-dong, Seocho District, southern Seoul. “Instead of the Gangnam areas, there is growing demand for apartments along the Han River because of their comfort and pleasantness.”

Most of the top 10 high-end apartments in Seoul were located in Daechi-dong and Dogok-dong in August 2008, a month before the global crisis. At the time, Dongbu Centreville was ranked the second-most expensive apartment, where a 3.3-square-meter unit sold for 48.71 million won. Today, it has dropped to 37.96 million won.

Apartments in these areas have seen the value of a 3.3-square-meter unit drop from above 40 million won to the 30 million won range.

The riverside apartments are particularly popular among middle-aged people. Out of every 10 people who signed a purchasing contract of the new Banpo Xi, four of them were in their 40s, while those in their 30s accounted for 30 percent.

“People who are rich tend to have bigger interest in managing their health, and as the housing market also has been changing, where people purchase them to actually live in them instead of as an investment means [by renting out the place], it seems demand for high-end apartments with amazing views and close proximity to the park is gaining popularity,” said Park Dae-beom, an official at Taekyung Partners, a company specializing in real estate asset management.

“In cities of major advanced economies like New York, residents along rivers are less affected by the economy,” said Kim Ji-eun, a researcher at the Korea Housing Institute. “

“An apartment along the Han River is separate from the ordinary housing market, and because its value isn’t going to drop much due to its scarcity, it will likely settle down as a high-end housing unit.”