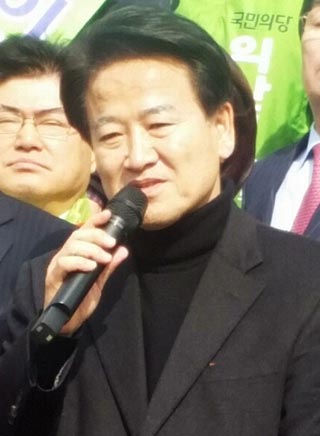 Chung, 62, who also served as the country’s 31st unification minister from 2004 to 2005 under former President Roh Moo-hyun, announced he would run for the position in Deokjin District of Jeonju, North Jeolla, in one of the country’s largest liberal regions.

The former three-term lawmaker will face off against Minjoo Party of Korea member Kim Keun-sik, a political science and diplomacy professor at Kyungnam University in Changwon, South Gyeongsang, whose research interests are on North Korean politics and inter-Korean relations. Kim also serves as the unification committee head of the main opposition party.

Telling reporters Thursday night that his political vision lies in “reasonable” liberalism, or one that sometimes “can be neutral,” Chung insisted it was the People’s Party’s main North Korea agendas that convinced him he we would be a good fit for the party.

Ahn Cheol-soo, co-chairman of the People’s Party, who defected from the Minjoo Party earlier this year amid a chasm with then-Chairman Moon Jae-in, met with Chung for about an hour and a half in Sunchang County, North Jeolla, on Thursday before they both declared Chung’s plan to join.

Reading from a written agreement, the two politicians pledged to work hand-in-hand to reopen the Kaesong Industrial Complex, defeat the ruling party in the next presidential election and devote to serving the livelihoods of the general public, among other points.

Chung also promised not to hold any leadership positions within the People’s Party.

The government earlier this month shut down the Kaesong complex in retaliation against the North’s fourth nuclear test and launch of a long-range ballistic missile.

“Now is the time to overturn Korea’s political landscape,” Ahn said, adding that he believes Chung will play a “significant role.”

As to why Chung had consistently rejected the Minjoo’s invitation to join their party, the former lawmaker said during a CBS radio show Friday morning that he was saddened by their passiveness toward the government’s decision to shut down the Kaesong Industrial Complex.

“When President Park Geun-hye was making that speech at the National Assembly,” he said, “they [the Minjoo Party lawmakers] should have just walked out.”

“If not the leading opposition party, who else is going to speak for the 100,000 laborers and their families who have lost their main source of living?” Chung said.

Born in Jeonju and a graduate of Seoul National University, Chung stepped down in January 2015 from his seat as senior adviser to the New Politics Alliance for Democracy, the predecessor of the Minjoo Party, and defected from the group to create his own, more progressive, party ahead of the by-elections in April last year.

Chung eventually lost to his contender from the ruling Saenuri Party in Seoul’s Gwanak B constituency.