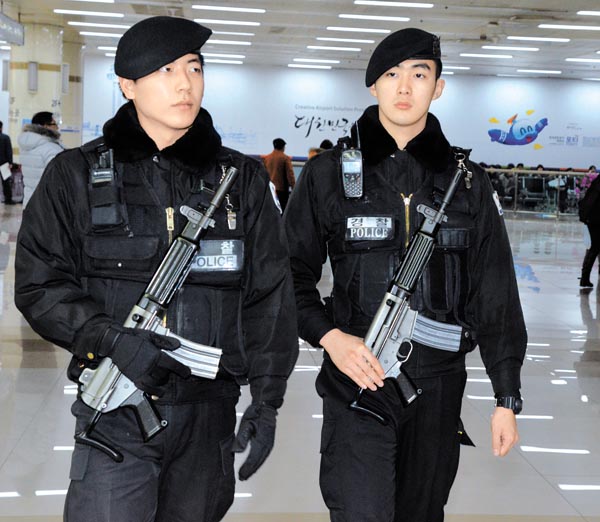 Special police forces patrol the interior of Incheon International Airport on Friday as concern over terrorist attacks by North Korea increased in the wake of the rogue nation’s fourth nuclear test and the recent long-range ballistic missile launch. [NEWSIS]

ollowing the latest intelligence assessment that North Korea is planning terrorist attacks against the South, security measures to protect high-value targets including influential defectors have been beefed up.

The National Police Agency has reinforced the security detail for former North Korean diplomat Ko Young-hwan, vice president of the Institute for National Security Strategy of the National Intelligence Service (NIS). He was put under the highest level of monitoring, as the intelligence community obtained a death threat from the North.

Ko served in the North’s Foreign Ministry from 1978 to 1991. He defected from his post as the first secretary of the North Korean Embassy in the Republic of Congo in 1991.

“I was told by the police that they had obtained specific threats,” Ko told Yonhap News Agency. “I was normally guarded by two agents, but the number has increased to eight.”

The North has previously assassinated a high-profile defector in the South. Yi Han-yong, nephew of the late North Korean leader Kim Jong-il’s mistress Song Hye-rim, defected to the South in 1982 while studying in Switzerland. He was shot in February 1997 by two assailants suspected of being agents from North Korean special forces. He died in a hospital later that month.

The NIS informed the government and the ruling party Thursday that North Korean leader Kim Jong-un had ordered the country’s intelligence agencies to prepare for terror attacks against the South. In addition to threats on cyberattacks and attacks on public facilities, assassination and kidnapping of high-value targets were also feared.

The JoongAng Ilbo reported Friday that the North had created a list of terrorism targets, including top security officials of the Park Geun-hye administration. The information was revealed at Thursday’s intelligence briefing by the NIS.

Kim Kwan-jin, head of the Blue House National Security Office, and foreign, defense and unification ministers were included on the North’s list of targets, sources who attended the meeting told the JoongAng Ilbo, quoting the intelligence authority’s statement.

“Lee told Chung that the counterterrorism bill must be passed as soon as possible,” a National Assembly official said. “They also requested that other pending bills including the labor reform measures and North Korea human rights act be passed before the end of the February session.”

The ruling and opposition parties and the administration have repeatedly introduced counterterrorism bills to the National Assembly over the past 15 years. The first bill was proposed in 2001 in the aftermath of the Sept. 11 terrorist attacks in the United States.

No vote has ever taken place, however, and some lawmakers fear such a bill would yield too much power to the NIS. The latest bill, proposed by the ruling Saenuri Party, seeks to establish a counterterrorism center inside the NIS, a plan that the main opposition Minjoo Party of Korea strongly opposes.

Rep. Won Yoo-chul, Saenuri Party floor leader, said Friday that it is imperative for the opposition to cooperate to pass the terrorism bill.

“Even if this bill is passed, the NIS will not go through bank accounts and wiretap to eavesdrop on conversations as we see in movies,” he said. “It needs to obtain permission in advance, and the outcome will be recorded.”

Won said citizens are being left unprotected to the growing terror threats because of the Minjoo Party’s obstinate opposition. “I urge the opposition party to seriously consider this urgent situation,” he said.

Won and other Saenuri leaders met with their Minjoo counterparts on Thursday to negotiate voting on the counterterrorism bill, but once again failed to reach an agreement.

A senior Saenuri lawmaker said Friday that the North is expected to launch cyberattacks on the South in the coming months.

“The North is expected to launch cyberattacks in March or April, before its Workers’ Party convention in May,” Rep. Lee Chul-soo, the Saenuri’s chief negotiator for the National Intelligence Committee, said in a radio interview on Friday. “They have always launched cyberattacks after a nuclear test. The NIS also made the same assessment.”

North Korea conducted its latest nuclear test, the fourth, last month. “They launched a long-range missile in February, so cyber terrorist attacks are likely to come in March or April,” Lee said. “And then terror attacks against public facilities and attacks targeting key figures are also expected as the next move.”