Broadcasts an earful for border folk

Broadcasts an earful for border folk 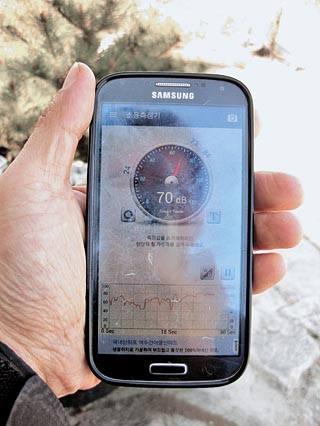 South Korean residents in the towns nearest the border have gotten more than they bargained for in the form of noise pollution since Seoul and Pyongyang stepped up their respective loudspeaker campaigns in the wake of North Korea’s fourth nuclear test.

The resumption of the propaganda broadcasts, a form of psychological warfare, has carried on now for more than a month.

The South switched back on its loudspeakers on Jan. 8, blasting bouncy K-pop songs and announcements critical of the North Korean regime, in retaliation for Pyongyang’s latest nuclear experiment, which its government claimed was a hydrogen bomb.

Pyongyang also resumed its loudspeaker propaganda in an attempt to drown out its longtime foe.

However, since the shutdown of the Kaesong Industrial Complex on Feb. 10 punishment - for Pyongyang’s launch of a long-range missile just days earlier - the broadcasts from the North have only grown louder and longer, according to residents.

Park Yong-ho, 62, the head of Samgot village just 4 kilometers from the border in Yeoncheon, Gyeonggi, said Sunday that the North’s broadcasts primarily emphasized how it had succeeded in its nuclear test and the rocket launch.

“In the morning, when it’s quiet, I can hear the sounds from the North clearly, hailing the Kim Jong-un regime and denouncing the Park Geun-hye government,” Park said. “It’s extremely stressful to have to hear North Korean propaganda.”

Park has an app on his smartphone that measures noise levels. The broadcasts from North Korea, it shows, range between 60 decibels (dB) and 80 dB - almost double the 40 dB of an ordinary environment.

According to Park, the propaganda is played for more than 10 hours a day, at varying times.

“I can’t fall asleep at night if it’s too loud,” said Shin Geun-sik, 62, who lives in a town inside the heavily fortified demilitarized zone (DMZ). “Since I moved here 40 years ago, I’ve never heard the North’s broadcasts this loud.”

However, for some citizens, the noise comes not only from the North but also from the South. A few residents said the South’s broadcasts were tolerable, pointing to the national security crisis, while other complained of increasing fatigue.

“It’s quiet inside the house, but whenever I go outside, the consistent drone of the broadcasts just continue all day long,” said Cho Bong-yon, 60, who lives in a town inside the civilian access control line, close to the border. “The sounds of both broadcasts mixing together make me tired.”

The loudspeaker campaigns in the border area heightened tensions between the two Koreas last summer.

South Korea previously resumed its broadcasts in August in response to land mine explosions inside the demilitarized zone that maimed two South Korean soldiers. In response, the North fired artillery across the border and gave Seoul 48 hours to turn the speakers off, going so far as to declare a quasi-state of war.

The feud was put to rest early on Aug. 25, following 43 hours of marathon talks that resulted in a six-point inter-Korean agreement outlined at the Panmunjom truce village.