For 2 babies in Daegu, a miracle after preterm birth

For 2 babies in Daegu, a miracle after preterm birth 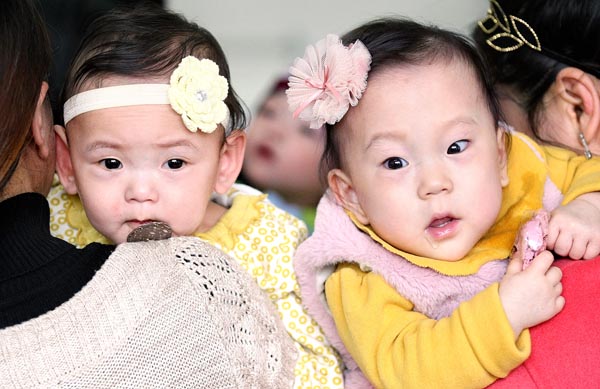 Hope, left, and Glitter visit Daegu Catholic University Medical Center with their mothers on Feb. 11, months after they were released. The hospital decided to designate the date as Miracle Day to remember their groundbreaking survival as extremely premature babies. [GONG JEONG-SIK]

Born to a Philippine woman, Hope had a head the size of an egg - she was so small she could fit in an adult’s hand.

Local doctors warned she had a slim chance of survival, and her relatives wondered if she could ultimately take after her name.

Yet, over the next 133 days, the infant’s condition improved to the astonishment of hospital staff and her family. And by April 15, 2015, she was finally permitted to experience life outside Daegu Catholic University Medical Center. She then weighed 3 kilograms.

When Hope and her mother paid a recent visit to the hospital to express their gratitude, the center’s staff members were so delighted by Hope’s physical growth that they decided to designate that day the hospital’s official Miracle Day.

Hope is now 6.7 kilograms. Every Feb. 11, the hospital will reflect on her remarkable recovery as part of efforts to help other premature babies at the hospital; there are currently 32 of them undergoing treatment there.

Over the 133 days when Hope was treated at Daegu Catholic University Medical Center, she relied on an artificial respirator to breathe and had to ingest her mother’s breast milk through a tube. Hope was also cared for via the kangaroo-mother technique, which involves prolonged skin-to-skin contact with an adult.

When abnormal blood vessels grew over her retina, she had to receive laser therapy.

While a baby born before the 37th week of pregnancy is considered a preterm birth, those like Hope born at or less than 25 weeks are considered extremely premature.

Among the 27 infants born in the latter group in 2014, the year Hope was also born, only one other is still alive.

Glitter, who was born at 22 weeks as well, on Dec. 9, 2014, weighed just 430 grams upon delivery. The infant, whose name is a pseudonym, was also treated at Daegu Catholic University Medical Center and now weighs 6.9 kilograms.

She accompanied Hope and her mother when they dropped by the hospital on Feb. 11.

“A little after she was born, we ran into some heart-thumping moments like when she would have brain hemorrhage,” Glitter’s mother said under the condition of anonymity. “The surgery really brought her back from the brink of death.”

For Glitter’s mother, nursing her newborn throughout the day - while barely resting for more than three hours each day - paid off on May 23, 2015, when she left the hospital with her daughter, at a healthy 4 kilograms, 166 days after her birth.

“In modern medicine, we tend to deem it impossible for a premature baby to survive if he or she was born earlier than 161 days, because their organs are critically immature,” said Dr. Kim Woo-taek, 60, who works in the hospital’s Pediatrics and Adolescent Medicine Department and looked after both Hope and Glitter.

“It’s amazing how they managed to make the journey.”