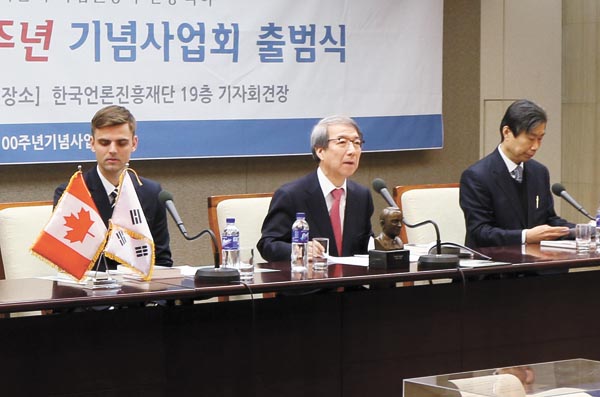 The detailed accounts of the Korean independence movement written by veterinarian Frank Schofield, the only foreigner recorded to possess a copy of the Declaration of Independence before the March 1 rally in 1919, had been missing for nearly 100 years before it was unveiled to the public Monday by the Tiger Schofield Memorial Foundation.

“Unquenchable Fire” details Korea’s independence movement in 298 pages and includes the Declaration of Independence, petitions for declaration, on-site accounts of the March 1 rally of 1919, and Schofield’s experience in tending to patients at the Severance Union Medical College and Hospital from 1916 to 1920.

Schofield made one copy of the manuscript; the original was lost by a publisher in London who withheld its publication for fear of harming U.K.-Japan relations at the time, and the copy was buried in the basement of the hospital.

It was found ruined with age by chance by a doctor at Severance Hospital in 1947 and returned to Schofield at his request. However, by the time of his death in 1970, it was no longer accounted for. The foundation purchased part of the document in June from Peter Allen, an archive document dealer in England, with 100 million won ($81,385) in financial assistance from Amore Pacific.

The documents Allen provided contained Chapter 15 of “Unquenchable Fire” and letters by Schofield to Arthur Henry Mee, a London-based publisher of children’s stories, along with more of Schofield’s works detailing the plight of Korean children.

“We hope to purchase and restore the whole manuscript of ‘Unquenchable Fire’ and publish it in English and Korean by March 1, 2019, on the centennial of the March 1 independence rally,” said Kim Jae-hyun, the secretary general of the Tiger Schofield Memorial Foundation.

Schofield came to Korea in 1916 from Canada as a missionary and veterinarian. While many missionaries were compassionate toward the Korean people during Japanese annexation, Schofield took on a more active role, photographing the March 1 movement, the Suchon-ri and Cheam-ri massacres in Hwaseong, Gyeonggi, and sharing his accounts in English-language newspapers like the Japan Advertiser.

The Ministry of Patriots and Veteran Affairs nominated Schofield as its Independence Fighter of the Month for March. Schofield is nicknamed among Korean historians as the “34th patriot” - there were 33 signatures on Korea’s Declaration of Independence heralded on the March 1 rally in 1919.

“His influence in the country is quite significant,” said Lee Hang, the director of the foundation. “The rest of the world may not have known about Korea’s independence movement at the time without his help.”

Despite being the only foreigner to be laid to rest in the patriot section of Korea National Cemetery, Schofield - and even his Korean name, Seok Ho-pil - doesn’t ring a bell with many Koreans.

“I was frankly embarrassed when the Korean immigrants in Toronto decided to work on a plan to build a memorial garden in the Toronto Zoo to honor the doctor, when we should have done something like that first in Korea,” said the foundation’s Honorary Chairman Chung Un-chan. “It’s a shame that Dr. Schofield’s work is not mentioned in national textbooks.”

Schofield is internationally renowned for his contributions to Korea’s independence movement as well as his accomplishments in the field of veterinary science - his research led to the discovery of warfarin, rat poison, and dicumarol, an anti-coagulant.

The foundation plans to celebrate the centennial anniversary of Schofield’s arrival in Korea this year with essay contests, discussion panels and a bike ride from the demilitarized zone with Schofield’s surviving relatives.