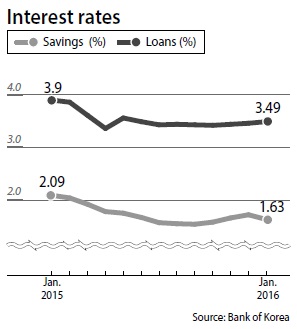 While the nation’s base rate remains frozen, the deposit interest rate dropped last month at commercial banks, while the lending interest rose as part of government efforts to slow down the sharp growth of household debt.

According to the Bank of Korea (BOK) on Friday, January’s deposit interest rates on new deposit accounts was set at an annual average of 1.65 percent, down seven basis points or 0.07 percentage points compared to the previous month.

The nation’s key rate is frozen at 1.5 percent, but the average interest rates on deposit accounts are declining as banks are slashing their market interests on expectations that the BOK is likely to lower the key rate in March.

However, overall lending rates - including both household and corporate borrowing - moved in the opposite direction to stand at 3.49 percent, up 0.03 percentage points compared to a month before, following looming risks on individuals and SMEs that they may not able to pay back the quickly-mounting household and corporate debt.

The month’s interest rate on newly-issued household debt was 3.28 percent, up 0.05 percentage points compared to the previous month.

With the deposit and lending interest rates moving the opposite way, the difference between the two interest rates reached 1.84 percentage points, the largest in the past 10 months, due to rising lending rates on risky households and SMEs. The interest difference allows larger margins for banks.

“The 1.84 percentage point difference is not a big amount, though,” said Choi Young-yeob, deputy head at financial statistics at the BOK. “The difference has remained small in recent years, as the base rate has been low.”

When it comes to corporate loans, commercial banks shaved off the interest rate by 0.05 percentage points to impose 3.57 percent.

“Lending rates on conglomerates are usually more generous than those for smaller companies, because high rates may lead the corporate giants to turn to the capital market instead of borrowing from banks,” Choi said. “Meanwhile, households and smaller companies have nowhere to turn to, regardless of the rate.”