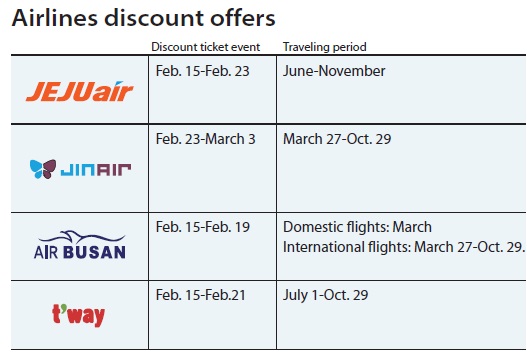 Discounted flights offered by budget airlines last week - with prices slashed as much as 98 percent - created a sensation among travelers.

But while passengers were all too happy to snap up the bargains, the airlines were just as pleased to see their flights filling up, as it is more profitable for airlines to sell tickets at extremely low prices than to manage an empty airplane.

Last week, consumers were stunned when Jeju Air offered one-way tickets on the Gimpo-Jeju flight for 5,900 won ($4.78). Excluding the 4,000 won charge for airport use, the cost would be the same as a person buying the ticket to Jeju for 1,900 won. This is the cheapest price airlines have ever offered on the flight between Gimpo and Jeju.

Other budget airlines are planning, or have already sold, special discounted tickets.

T’way Airlines offered 18,000 seats at a special discounted price. It differed itself from competitors by offering tickets at a much lower price when booking more than one seat.

Competitor Jin Air started offering discounted tickets this week. The ticket sale is scheduled to end on March 3, and the airline is giving out 71,000 seats at special discounted prices for travel between March 27 and Oct. 29.

Although such bold strategies may look like a huge loss for the budget airlines, industry insiders say it is more beneficial for the companies than flying empty planes.

“We have decided on the special price offering to raise our seat occupancy rates steadily,” a Jin Air official said.

In addition, such ticket discount events are a huge contributor to the companies’ marketing strategies. The moment Jeju Air’s special discount tickets went on sales, 210,000 people visited the budget airliner’s website, which immediately crashed. However, at the end, the company was able to secure more than 120,000 newly registered members.

There has been criticism that the discount events only benefit the company since there are very few tickets offered. The 43,000 seats that were offered during Jeju Air’s discount event only account for less than 1 percent of the annual 8.15 million tickets the airliner sells a year.

“Since the number of seats available on the special discounted prices are very limited, there are many cases where those who tried and failed ended up booking for other much more expensive tickets,” a Korean Air official said.

The services provided by the special tickets because of their low cost may not be as good either.

Tickets sold at special discounts are on flights that travel during odd hours or less popular seasons. Refunds are not allowed as well, and other changes can be expensive.