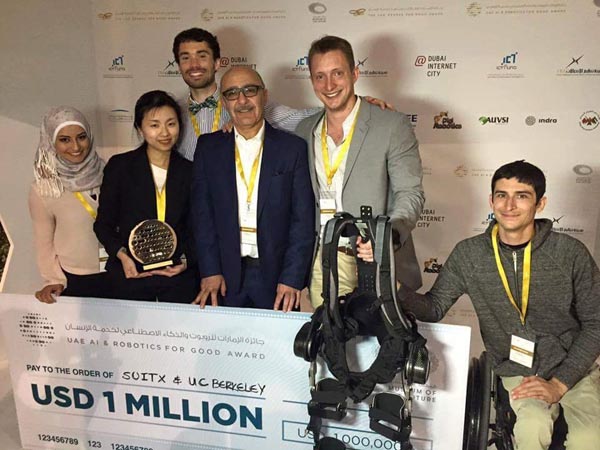 Jeong, second from left, and the co-founders of SuitX, receive the Artificial Intelligence and Robotics Award for Good at a competition held from Feb. 4 to 7 in the United Arab Emirates. [JEONG YOON-JUNG]

A Korean robotics engineer and co-founder of an American robotics start-up has developed a prosthetic exoskeleton that can be worn over the body to help paraplegics - those paralyzed from the waist down - to walk.

SuitX, a start-up founded by engineer Jeong Yoon-jung, 31; Homayoon Kazerooni, a professor at the University of California, Berkeley; and four other engineers, won the Artificial Intelligence and Robotics Award for Good at a competition held from Feb. 4 to 7 in the United Arab Emirates.

The prize money of $1 million is the most ever granted in artificial intelligence and robotics competitions for welfare, medical or educational purposes. The four-day competition drew 660 teams from 121 countries.

Jeong, who studied mechanical engineering at Yonsei University, received her doctorate in the field in 2014 from the University of California, Berkeley. 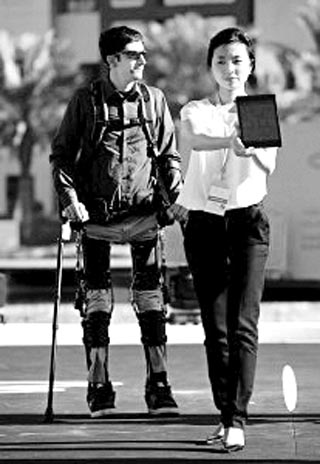 The Phoenix, which SuitX showcased in the competition, is a robotic exoskeleton that allows users paralyzed from the waist down to walk. The wearer can stand up from a wheelchair and walk at a speed of about 1.8 kilometers per hour (1.1 miles per hour).

Only businesses that operate on a global scale, such as Lockheed Martin, Cyberdyne, Toyota and Honda Japan and Hyundai Motor have been successful in developing robotic exoskeletons.

But unlike many existing models of robotic exoskeletons, the Phoenix can easily be disassembled due to its modular structure.

“The modular structure of the Phoenix allows the prosthesis to be worn like clothes, because it can be divided into parts for the legs and for the body,” Jeong said.

Weighing about 12 kilograms (26 pounds), the robotic exoskeleton is half the average weight of similar products sold today.

Equipped with a powerful battery, the prosthesis provides the wearer four hours of walking time when fully charged.

SuitX’s beginnings date back to 2011 when Prof. Kazerooni, who runs the Robotics and Human Engineering Laboratory at the University of California, Berkeley, established the start-up with Jeong and four other students.

But unlike in Korea, she said, the entrepreneurial culture of the United States allows more academic projects to develop into business enterprises.

“Master’s candidates studying robotics can easily open a start-up in the United States through programs at the National Science Foundation or Small Business Innovation Research,” Jeong said, “while in South Korea, conglomerates run most of the robotics industry.”

“There are more than 100 robotics start-ups like SuitX in Silicon Valley alone,” she added.

Her final career objective, Jeong said, is to create an Iron Man-like prosthetic suit flexible enough to be worn easily over the body.

“Five years from now, I’m confident that paraplegics will be able to play football,” she said. “I believe that mechanical engineering, applied in the right direction, can provide hope for people’s lives.”