‘No Brand’ will get first flagship store

‘No Brand’ will get first flagship store 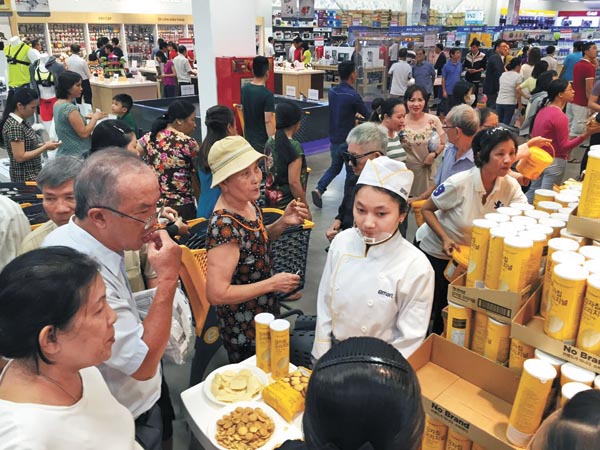 Shinsegae Group will open its first store dedicated exclusively to the popular “No Brand” line of products made by the group’s large discount store E-Mart.

E-Mart launched the No Brand line last year, which is able to offer high-quality products at low cost thanks to minimal branding and no-frills packaging.

The line already includes food, snacks and other basics, but the group now plans to introduce more variety with kitchenware and other home products.

The group’s vice chairman, Chung Yong-jin, recently finalized plans for the first store named “No Brand Shop.” It will open in September at Hanam Union Square, a large multi-purpose complex located in Gyeonggi, according to the group.

“We need to strengthen the lifestyle sector rather than just focusing on fresh food in order for E-Mart to become competitive in the global market,” Chung was quoted as saying. “No Brand will catch up to Japanese retail company Muji.”

The group decided to open a dedicated No Brand store after the products proved more popular than expected following the line’s launch last April.

No Brand products are 40 to 60 percent cheaper than name-brand alternatives. E-Mart visited both local and foreign factories to standardize packaging to keep prices low.

The total sales of No Brand products including potato chips, chocolates, tissues and soap reached 7.8 billion won ($6.3 million) in January, up from 2 billion won in July. More than 10 million items were sold last month.

The group believes that expanding the number of No Brand items is the best way to continue making headway into global markets. The line has been selling well in China and Vietnam.

E-Mart opened its first branch in Vietnam last year, and the No Brand products have been so popular that a display of butter cookies was knocked down by a customer who was trying to buy the store’s entire inventory.

The group is considering distributing its No Brand products not only to E-Mart stores, but also to other retailers in the region. The group said retailers in Iran and other countries in the Middle East are interested in the line.

Chung is focused on the No Brand business as one way to vitalize the retail industry as a whole.

Local discount chains are also hurting as online based retailers continue to grow rapidly in Korea.

“We recognize that the only way for us to survive in this industry is for retailers to become manufacturers at the same time,” said an official at the group.

According to Chung, “E-Mart needs to transform from an ordinary mart to a company with its own brands.”

E-Mart plans to expand the number of No Brand products by 400 to 500 by the summer. The company is currently developing 20 new products every month, and plans to offer 1,000 items by 2020.