Paintings come to life on stage

Paintings come to life on stage

The National Gugak Center is holding performances inspired by the 18th-century master Shin Yun-bok’s paintings today. One of them is “Dance With Two Swords,” right, and the resulting performance is a sword dance of the same title. [NATIONAL GUGAK CENTER]

Every Wednesday at 8 p.m., the center is offering Korean traditional dance performances at the center’s Pungnyu Sarangbang, located next to Seoul Arts Center in southern Seoul.

This week, the center said it’s not just staging ordinary dances from the past, but dances that were also depicted in paintings by famous Joseon-era artists.

The famous painting by Shin Yun-bok (1758-unknown) titled “Dance with Two Swords,” depicting two gisaeng, or professional female entertainers of the Joseon Dynasty, dancing with swords in their hands surrounded by people, for example, is one of six programs that will be enacted on stage today. 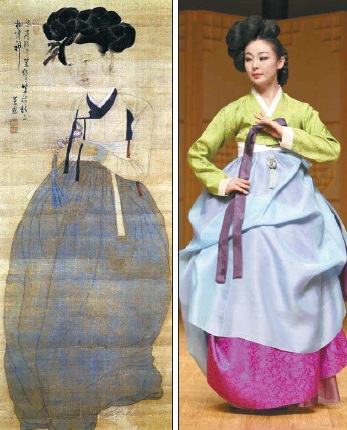 Shin’s “Portrait of a Beauty,” left, one of the most famous paintings from the Joseon Dynasty (1392-1910), is being turned into a dance performance by the National Gugak Center. [NATIONAL GUGAK CENTER]

The performance not only includes traditional paintings and dance performances, but also poems as video images in the background that relate to the scenes. “The characters’ movements and the expression of details in the old paintings are collaborated with poems that symbolically share the theme to help give a better understanding of the arts of that period,” said an official from the center.

The six programs based on paintings include the works of painter Shin, who was one of the most famous court artists in the late Joseon Dynasty, as well as Kim Hong-do (1745-1806), one of the well-known genre painters of the period.

The paintings are mostly extracted from the Uigwe books, or the Royal Protocols of the Joseon Dynasty. They encompass all the details of life in the royal court through writings and drawings.

“This new performance is a creative work to regenerate the moments of the past recorded in the old paintings or books onto the modern stage,” Han Myung-ok, artistic director of the National Gugak Center, said. “It is also another kind of record.”

“The National Gugak Center will put effort toward fostering further convergence of content that could contribute to the development of various repertoires of traditional performances,” Han added.

The performances feature a narrator who first introduces each section, along with showing images or reciting poems, and then the dance performance begins. This format is meant to help viewers understand the overall meaning.

For example, in one of the programs called “A Dancing Child” focuses on the genre painting “Mudong” by Kim, meaning a child who dances and sings in the royal court. The painting was regarded an important record of the dynasty since it illustrated details of the history of Korean manners and customs.

Another program titled “The Painting of a Beautiful Woman” is based on the painting by Shin of the same name. It reflects the customs of women and the trends of the late Joseon dynasty. In particular, a poem written in the painting delivers a message of a woman carrying love, but it cannot be fully elaborated through the painting.

The performance expresses the sentiment of a woman through the delicate movements of four dancers.