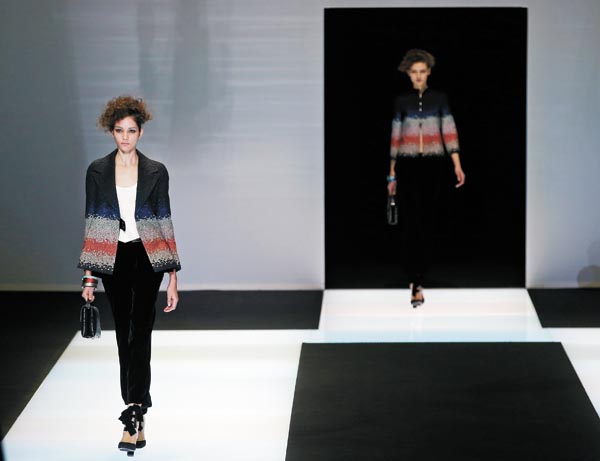 MILAN - Not just individual styles but the entire fashion process was under discussion at Milan Fashion Week this year. Counter to trends in New York and London, Italian industry executives underlined that, beyond a few capsule collections and a handful of runway teasers, there would be no rushing Milan’s designs from the runway into stores.

If anything, the president of Italy’s National Fashion Chamber, Carlo Capasa, indicated a preference to slow down the arrival of these fall-winter fashions, sending them to the stores when the weather cooled, instead of in September.

Those who want the real made-in-Italy deal have to wait, for the most part, six months until Milan’s latest trends, in all their well-researched and handcrafted glory, are on sale - a system that is not changing anytime soon.

Some highlights from the shows Monday on Day 6 of Milan Fashion Week:

Velvet is the blank page on which Giorgio Armani drew his next fall-winter collection.

The looks literally unfold, with hidden chiffon pleats in the sides of dark velvet trousers that gently open and close like an accordion with each step. Among the other hidden delights: Contrasting floral stripes inside trouser legs that match the fabric of the jackets.

The silhouette is soft and rounded, but Armani is democratic when it comes to trouser cut and jacket form, offering something for everyone. Hemlines vary from just above booties to tapered at the ankle, cuffed and not, sometimes gathered like athletic pants. Jackets were short and swingy, sculptured with subtle peplums or long blousons.

Pants were for day, dresses for night and no bare legs this round. Evening looks included a velvet pantsuit with a crisscross top revealing the midriff and shoulders. The look was wrapped in a chiffon cloud.

Armani told reporters backstage these are “clothes to make a woman feel good in an elegant way.”

DSquared2’s runway presentation for next fall-winter was a history of warfare through its costumes, from Mongolian warriors to modern-day fighters in khaki and camouflage.

Fittingly, the Canadian designing twins Dean and Dan Caten showed their collections in the courtyard of a military academy and reserved front-row seats for the commander and an aide dressed in military finery for a real world reference point.

From khaki and camouflage jodhpur-style knickers with cropped jackets and tops of lace, ruffles and leather, the designers traveled back in time and across the globe to the Asian steppes for elaborate fur-trimmed coats with high collars, multiple lapels and embroidered panels.

The looks were fiercely layered with a plethora of military detailing. Tassels flounced from ears, belts and shoulders. Necklaces and belts had detailing worthy of the armor of a proud warrior.

The final look recalled the other side of a warrior’s tale: A naval widow in a Victorian-style satin jacket with lacy top over a long black skirt with trailing pleated bustle.

While last season’s looks had a Lolita ennui, this season Arthur Arbesser went back to basics and reworked the school uniform.

His ideal schoolgirl wore aprons, wide pleated skirts and strict jackets. Her skirts were long, neat and pleated, sometimes with an apron top. She layered with abandon, with shorter pleated skirts over pants as snug as leggings and worn with a belted jacket. Velvet dresses with detachable knit white collars were for the choir.

A sense of finery was derived from materials in golden silk, deep yellow, rose pink and soft blue. Prints included botanical patterns of fall leaves by the illustrator Agathe Singer that were made into chiffony dresses and skirts, and a design by Arbesser of the outlines of hands, like a child’s drawing, overlaying one another for a feathery impression.

Arbesser’s Austrian roots peeked out only briefly at his second Milan runway collection - in the Viennese waltzes that welcomed the fashion crowd to a disused industrial space that was his runway, and in outerwear of precious Loden. AP