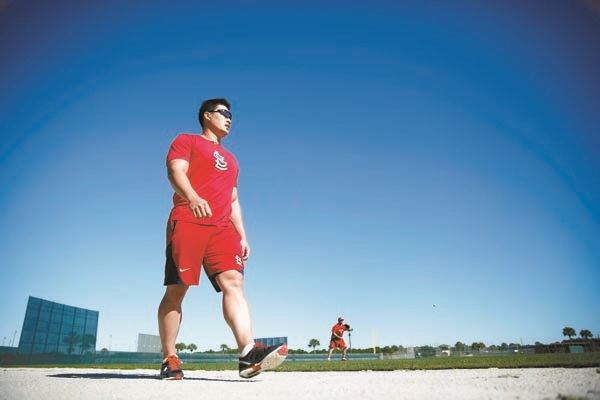 Saint Louis Cardinals pitcher Oh Seung-hwan has been getting more mentally and physically prepared for his first season in the Major League Baseball (MLB) during the Cardinals’ spring camp at Roger Dean Stadium in Jupiter, Florida. Oh also seems to be getting along well with his new teammates. “An-nyung haseyo,” said Tyler Lyons, left handed pitchers from the Cardinals, to the reporter. “I learned that from Oh.”

About two weeks have passed since pitchers and catchers gathered at the Roger Dean Stadium to begin spring training. Among them was South Korea’s Oh, who has seemed relaxed during practice sessions.

With first Grapefruit League game taking place tomorrow against the Miami Marlins, hopes are high for Oh in his appearance at the spring camp exhibition game.

Q. How is your physical condition?

A. It is fine. I think it’s progressing according to the camp schedule.

Have you lost weight?

I haven’t weighed myself. But I think I may have lost some weight. I eat well though.

How was your pitching training on Feb. 29?

This was my second live pitching session. I threw a lot of changeups. I felt more in control when I was pitching against the second batter.

How many balls did you throw?

I threw about 25 balls against two batters.

What type of balls did you throw?

I threw everything, from the fastball to fast and slow sliders. The catcher suddenly gave me the sign for a changeup, so I threw some changeups as well. Adam Wainwright helped me with curveballs. He showed me his grip.

The assessment of your live pitching session was good. What do you think?

I haven’t played a single game yet so I think any assessment is a little premature. I am glad to receive positive feedback though. But I’m still in progress.

Did you have any conversations with the coaching staff?

I talked with manager Mike Matheny and pitching coach Derek Lilliquist. There was no mention of the specifics of my pitching. They did tell me my pitching looked better overall compared to my first session.

Park Byung-ho of the Minnesota Twins and Kim Hyun-soo of the Baltimore Orioles were worried about the spring camps since they began much later compared to Korean clubs’ spring camp. What do you think as a pitcher?

Pitchers have more discretion on the training schedule based on their condition. I think it is tougher for hitters such as Park and Kim since they may have less time to get used to the vibe at the MLB.

You have experienced spring camps in Korea, Japan and now the United States. Are there any differences among them?

They look different at first. But once they begin, not so much. Team training sessions are definitely shorter here. But the amount of training and the schedule are about the same. Players have autonomy in their training here. I find it beneficial that I have more personal workout sessions. I can pinpoint my weaknesses and work on them on my own.

What’s your focus for the remaining schedule?

Official exhibitions games are coming up soon. I need to be in the best physical condition possible. I may make some unexpected mistakes. I need to prepare myself.

Do you feel like you need different types of pitches?

It does not make sense to try to come up with a new pitching style at this point. But I have been told that I need to throw new types of changeups since I was in Korea. I also feel the need to do so. I am practicing the two-seam fastball, a variant of the straight fastball. Although I haven’t thrown one in an actual game, I have been practicing consistently since I was in Korea. Now that I am here in the Major League, I think I may try to throw curveballs or two-seam fastballs more often, in addition to the regular straight fastballs and curveballs.

How is your teamwork with catcher Yadier Molina?

We try to talk a lot. Molina usually starts the conversation. He checks up on me regularly and provides me with detailed feedback. I appreciate that. When I am pitching, Molina is often standing near and watching me.

You were the closing pitcher while playing in Korea and Japan. But you are likely to be a setup man rather than a closer this season. What do you think?

Whatever the inning I step onto the field to pitch in, I always imagine that it’s the final inning of the game. I think that is the right mentality. Also, as a setup man, I can be relieved of some pressure since I can be assured that there is a good pitcher after me in the rotation. I’m trying to stay positive.

There are 162 games per team in the Major League. Is that burdensome for you as a bullpen pitcher?

I think I will be less burdened than I was while in Korea or Japan. I am aware that manager Matheny is good at deciding on the pitching order.. There are a lot of games, sure. But I think I will not be throwing successive games like I did before, which is better for me to pace myself physically. Teams consider long term strategy in the Major League. From what I understand, a pitcher would not be throwing four successive games in a row.

How is your English?

I try not to be anxious about it. I am studying the language right now. I don’t think it is a good idea to stress over it. It will come in time, just like it did while I was in Japan.

You have many different nicknames such as “The Final Boss” or “Stone Buddha.” What’s your favorite?