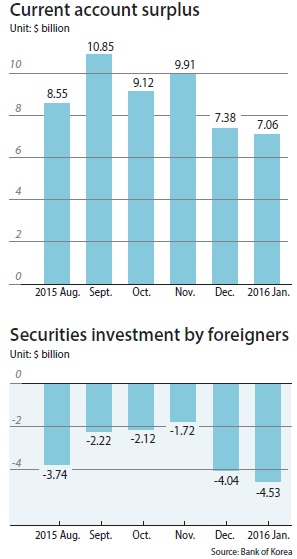 The growing exodus of foreign investment from Korea has elevated concerns while the country’s current account balance continued its 47 month-long surplus streak in January.

While the surplus is due more to the sharp fall in imports rather than improvement in exports, investments in local securities by foreigners, known as portfolio investment liabilities, tumbled $4.53 billion, which grew from $4.04 billion in December.

Foreign investments in Korean securities have shrunk for eight straight months, which indicates a significant amount of foreign capital is leaving the local market amid growing uncertainties in the global economy and greater uncertainties in Asian financial markets including China.

The total net assets from stock and bond investments, which combined both domestic and foreign investments, stood at $4.65 billion.

According to the Bank of Korea on Wednesday, the current account in the first month of this year recorded a surplus of $7.06 billion. The current account surplus started in March 2012. The last record was held for 38 months from June, 1986.

The current account consists of the balance of trade, net earnings on foreign investments and net cash transfers.

As it has been in the last couple of years, the biggest contributor to the ongoing surplus was largely waning imports. Exports in January fell 15.8 percent compared to a year earlier to $37.8 billion. Imports saw a sharper drop as they tumbled 23.1 percent to $29.7 billion won during the same period, bringing in the good’s account surplus to $8.11 billion.

The drop in both exports and imports was actually stronger than the last couple of months.

Exports fell due to sluggish demand from China and other emerging economies combined with falling oil prices and resulting decreases in unit prices of major export items.

“A usual trend is that exports show declines in January and February,” said Shin Byeong-gon, an official at the central bank at a briefing. “Considering the February exports slightly increased, the exports shrunk in January due to temporary factors.”

“Due to the global slowdown, overseas stock markets are seeing adverse conditions, which largely affected the local market,” Shin said.