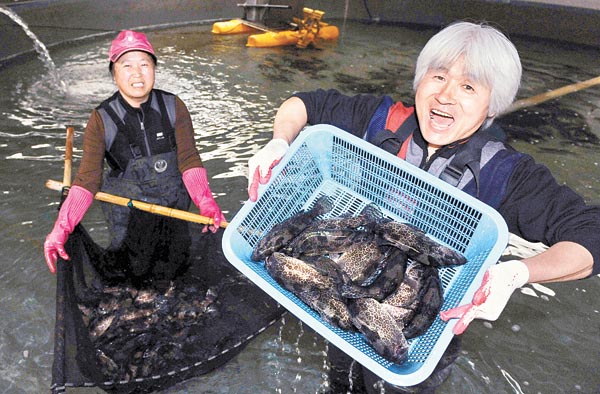 Fish farmers hold up their catches of mandarin fish that were fed special feed at the Inland Water Research Institute of North Chungcheong. [KIM SUNG-TAE]

North Chungcheong, an inland province, has transformed into a business mecca of freshwater fisheries thanks in part to the provincial government’s efforts to develop technologies that protect and increase breeding of highly economical fish.

Those include species like the mandarin fish, catfish and marsh snail.

Since 2012, the Inland Water Research Institute of North Chungcheong has worked to develop a new cultivation technique for mandarin fish.

After being fed special feed, mandarin fish exhibited an increased survivability rate of 80 percent and an increase in size to 28 centimeters (11 inches) - big enough to be sold as a restaurant entree.

Via this technique, about 30,000 more mandarin fish were caught in North Chungcheong last year.

“We are finally starting to reap the benefits since we released the fish [from the institute] in 2009,” said Um Man-seob, the head of the business team at the Inland Water Research Institute of North Chungcheong.

The fish were released when they were young to increase the number of fish that had dwindled due to environmental changes, including dam construction and pollution.

“Once the mandarin fish cultivation technique is expanded to other fisheries, production is expected to further increase,” Um said.

The North Chungcheong government currently plans to release a total of 280,000 fish, including eels, cat fish, carp, and Korean bullheads.

The provincial government has also been working on protecting local fish species since 2009 by eradicating foreign fish species, such as blue gill and bass, which feed on local species. The government has so far caught a total of 310 tons of foreign fish, which were then used to make compost and fodder by the resources management center.

The North Chungcheong government also plans to build a fishway - a barrier built around artificial water structures to facilitate natural migration - in Miho stream in Jincheon County, and Ssangcheon and Sinwol streams in Goesan County, to help salmon, sweet fish and Chinese mitten crab return to their homes to spawn.

It will additionally build artificial inland-water spawning areas in seven cities and counties in order to increase the hatching rate.

“The development of the inland fishery business possesses two merits - increasing fisheries’ incomes and protecting domestic fish,” said Kim Mun-keun, the head of Korea Agency of Education, Promotion and Information Service in Food, Agriculture, Forestry and Fisheries in North Chungcheong. “We are also working on a technology that will speed up the growth of cultivated fish.”