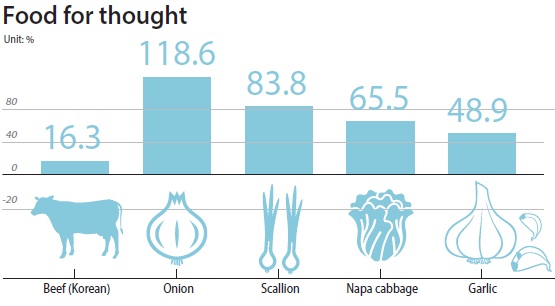 Housewife Ms. Chung has been cutting back on grocery shopping lately, especially fresh produce, and only buys items when vegetables and fish are reduced in price just before stores close.

“More recently it feels as though I’m paying more for less items,” said Chung, 40, who lives in Suji, Gyeonggi.

“I keep hearing on the news that inflation is low but when standing in front of the cashier and looking at the monitor it doesn’t feel as though my grocery spending has shrunk. When I throw in several vegetables and several essential necessities it still easily goes over 50,000 won, which is becoming a burden especially when your income hasn’t increased at all and you are losing money.”

The daily lives of middle- and lower-income families is becoming more expensive as the price tag on fresh produce has risen to the highest level in three years. 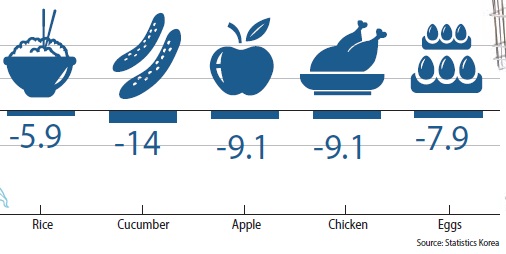 According to Statistics Korea on Thursday, consumer prices in February increased, easing concerns of a low inflation rate.

In February consumer prices grew 1.3 percent year-on-year, an improvement from the previous month. The market was concerned about the first month of the year as inflation lifted only 0.8 percent, a drop from the 1.3 percent growth in December. When comparing month-on-month, consumer prices moved up half a percent whereas in January it remained unchanged.

Normally the increase in consumer prices is welcoming. Growth of less than 1 percent for most of last year raised concerns that the Korean economy was heading for economic deflation.

This time the new worry is that the inflation hike last month was largely caused by the skyrocketing price of fresh produce as supply has fallen on the back of an unusual cold spell and heavy snow.

Fresh produce prices rose nearly 10 percent at 9.7 percent, the highest in 37 months. The last time the priced of fresh produce soared so much was in January 2013 when it grew 10.5 percent year-on-year.

Because of the unusually cold weather since mid-January, onion prices have soared by as much as 118.6 percent. Other vegetables staple to Korean diets such as scallion, Napa cabbage and garlic as well as white radish, key ingredients in kimchi, all grew more than 40 percent.

“The easing of petroleum prices as well as the rise of agricultural and marine products as well as higher service charges had a huge influence [on the higher inflation in February],” said Woo Young-jae, Statistics Korea director on consumer price statistics. “Due to the unusual cold and the heavy snow, supplies have shrunk whereas demand went up because of last month’s Lunar New Year holidays.” 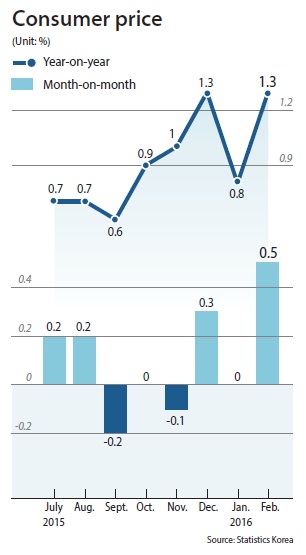 The statistics agency’s director, however, stressed that the contribution of fresh produce on overall inflation was low by saying it only takes up about 4 percent.

“People feel as though consumer prices have gone up sharply because fresh products are items that the general populace frequently purchases,” said Woo.