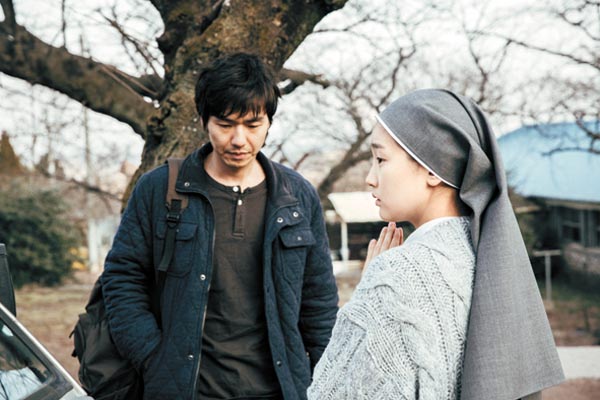 In the snowy cold, a man, Jeong-wu (Kim Tae-hun), walks toward an asylum which is run by nuns for treating alcoholism. He cannot differentiate between reality and dreams.

Through the gradual interactions with Sister Maria, played by Park So-dam, who helps him fight his addiction, Jeong-wu gains courage. However, he again falls into the abyss after he meets a hunter who is carrying alcohol in his bag.

The film portrays the pain of each character without any interference from outside factors, except for the cold, snow and the forest.

All the characters have painful histories that need care. But the process of healing does not come at once. Just like in reality, all have to overcome certain hardships. Thus, the development of the plot in the film does not rush in that manner.

The movie is set at Noan Catholic Church located in Naju, South Jeolla.

It was the first church built in the Naju area in 1927.

Park has been working constantly since her film “The Priests” in 2015. Her delicate portrayal of a young nun as a lonely girl and a person of religion will touch the hearts of moviegoers.

Something scary and tragic is happening in the demilitarized zone. People die and disappear without any reason.

The most elite troops are sent in to investigate. Only 24 hours are given, and if the time runs out, nobody knows what will happen next.

The teams are set with Cho Jin-ho, played by Kim Min-jun, in the lead and Shin Yoo-hwa, played by Lee Ji-ah, as the assistant.

The fear of death creeps up on them as they find clues to the mystery one by one.

This film is Lee’s first debut on the big screen. She has been appearing in TV dramas such as “The Legend” (2007) and “Thrice-Married Woman” (2013). She has tried diverse roles in order to widen her field of acting.

In the film, she plays a strong woman character who is an elite soldier who specializes in chemical warfare and microbiology.

The director Gumo wanted to manifest the anxiety over the tense situation and the hope for peace of North and South Korea simultaneously in the film. It has featured the characteristics of the demilitarized zone.

The film is expected to follow in the footsteps of the hit 2004 film “R-Point,” which dealt with a thrilling mystery in a war zone.

In a small room, there is nothing but a bed, a bathtub and a little television. A young woman and her little son live there like prisoners. They are totally secluded from the outside world.

Seven years ago, when Joy, played by Brie Larson, was 17, she was abducted by a man called Old Nick who rapes her constantly. She gives birth to a boy, Jack, played by Jacob Tremblay, two years later.

When Jack turns 5 years old, Joy decides to escape on behalf of her son so he doesn’t remain isolated from society anymore.

However, the escape and the adjustment to a new life are not easy for either of them.

It is based on the book of the same name written by Emma Donoghue in 2010. She wrote the novel after hearing the story of Felix, the son in the real story, known as the Fritzl case in Austria. She participated in writing the movie script as well, which is rare for original authors.

For her role in this film, Larson won the Academy Award for Best Actress. She prepared the film by living in solitary confinement for a month to understand the character’s psychology.

The film centers on the undying love between a mother and a son along with their strong will to be free.

The deeper you go down the road to the truth, the harder it is to reveal the whole story.

However, the truth must be told.

This Oscar-winning movie is based on the real story of an investigations team called ‘Spotlight’ at The Boston Globe, one of the top three daily newspapers in the United States.

The team launches an investigation about cases of child sex abuse by Roman Catholic priests in Boston, resulting eventually in winning the 2003 Pulitzer Prize for Public Service.

In 2001, the team, under the new editor Live Schreiber playing Marty Baron, finds the truth hidden behind the sexual abuse of children. As it is revealed slowly, the shock in the Boston area snowballs.

The movie showcases how the journalists track the truth to reveal a tragic secret to the public. It highlights the professional spirit and the teamwork of the Spotlight group.

The message of the film prompts one to think about power and the importance of journalism.

A spectacular fight between the god of sky, Horus, and the god of darkness, Set, is about to happen in Egypt. Amid the fight, Bek (Brenton Thwaites), appears. Who will seize the throne?

The film is based on the myth of Osiris, the most famous Egyptian myth of all time. But as it is not well-known compared to Greek Roman mythological tales, so it will be a new experience for moviegoers. The story also brings up basic morality through the relationship between gods and humans.

Gerard Butler plays Set, an evil character who is totally different to the character Butler played in “300” (2007). He has come back to the screen with an action performance that viewers will be unable to take their eyes off of.

Moreover, Nikolaj Coster-Waldau, who became famous for playing Jaime Lannister in the hit series “Games of Thrones,” plays Horus. It is enjoyable to see how he strives through difficulties to fight for the throne.

Do not miss out on the resurrection of ancient Egypt and the characters’ outstanding performances.

Slaves exist in modern Korea on a little island that produces salt in the salt marshes. The journalist Hae-ri, played by Park Hyo-ju, goes to the island in order to closely study what is happening in the area.

But an incident of mass violence has occurred. One has fallen in coma and other three people disappeared. Hae-ri is the one who is in a coma.

To make matters worse, the investigating police are in a rush to bury the case.

Will the case be able to be brought in front of the public?

The film is based on a real story that happened in 2014. People in a small town in Mokpo, South Jeolla, have been consistently exploited and confined to forced labor.

A mentally disabled person barely escaped from the place, which made the public aware of such occurrences.

Indifference, greed and irresponsibility were the key words that came to Director Lee Ji-seung’s mind when he was coming up with ideas for the film.

Actor Bae Sung-woo plays the role of the disabled person, Sang-ho. He tries to conceal the truth from the journalist, Hae-ri.

Moviegoers will enjoy how the two main characters confront each other, with one trying to reveal the truth and the other trying to hide it.