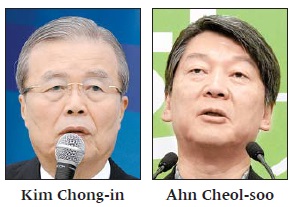 Only a month after its launch, the political party of Ahn Cheol-soo was showing signs of fracturing Thursday as key members explored the main opposition party’s offer of a political remarriage ahead of the April general election. Kim Chong-in, interim leader of the Minjoo Party of Korea, formally proposed a merger with Ahn’s People’s Party on Wednesday, inviting politicians who recently abandoned the Minjoo Party to return. The offer effectively created a rupture in the People’s Party, as some members considered boomeranging, prompting a furious reaction from Ahn.

“The merger proposal is a nasty political maneuver to stop the People’s Party from becoming a strong third party,” Ahn, a co-chairman of the party, said Thursday on a visit to Busan. “They said they will accept anyone except Ahn Cheol-soo. This is abusive, obsolete politics.

“Kim is not the owner of the Minjoo Party; he is a temporary leader,” Ahn continued. “The party’s owner has not been changed. It will go back to its obsolete hegemony and exclusivism after the general election.”

Ahn also said past liberal electoral alliances failed to beat the ruling Saenuri Party. “I will never give up, and I will change the old way of politics,” he said.

An aide to Ahn said traitors are welcome to return to the Minjoo Party. “Lawmakers will have to make a choice,” he said. “If those challenging us will leave, our support rate will actually go up.”

While Ahn condemned Kim’s offer, other members of his new party seemed to be interested in it. The JoongAng Ilbo surveyed all 18 lawmakers of the People’s Party on Wednesday evening, and only four representatives including Ahn opposed the merger.

Rep. Chun Jung-bae, a co-chairman of the People’s Party, and Rep. Kim Han-gill, the party’s chief campaign manager, said they will consider the possibility.

“As we try to end the two-party system, we may allow one party to dominate,” Kim Han-gill said. “That is a serious concern.”

An aide to Chun criticized Ahn’s rejection of the merger offer. “We don’t have much time, and he is trying to kill us all,” he said. “A mutual destruction of the Minjoo Party and People’s Party is expected, and how is that preferable to a merger?”

An associate of Kim Han-gill also complained. “Is Ahn giving an ultimatum to us to leave?” he said.

“If the current situation continues, we will end up becoming an obstacle that prevents the opposition from winning [by splitting liberal votes],” he said. “If we reject the merger offer, and if the Saenuri Party wins more than 200 seats, we will be the sinners.”

In January, Moon Jae-in, the candidate defeated in the 2012 presidential race and a key member of the pro-Roh faction, stepped down from the chairmanship, appealing for unity to the People’s Party. He also appointed Kim Chong-in as the Minjoo Party’s new head.

Another three lawmakers of the People’s Party said they think electoral alliances with the Minjoo Party in the capital region are necessary so that the two parties back a single candidate.

Interim Chairman Kim Chong-in of the Minjoo Party said he anticipated this situation when he made the merger offer. “Ahn left the Minjoo Party because he was determined to become a presidential candidate next year,” Kim said Thursday. “He is still holding on to that idea. That’s why he has to reject my proposal.”

In his interview with the JoongAng Ilbo, Kim said what he meant by liberal unity was a merger between the two parties, not a temporary electoral alliance. “We used to be one party, but became two,” he said. “I am saying it should be one again. I never used the term ‘alliance.’”

Kim also spoke cynically about Ahn’s reaction. “If a politician is single-minded in his pursuit, it will never help him,” Kim said. In contrast, Kim said Chun and Kim Han-gill know more about elections because they are seasoned politicians.

Rep. Kim Sung-gon, a senior member of the Minjoo Party’s nomination committee, said the People’s Party was going to field candidates in 80 of the 122 constituencies in Seoul, Incheon and Gyeonggi.

“Unless we merge or consolidate candidates, the liberals won’t even win a half of that,” he said.

The representative said candidate registration ends on March 25, and the merger must be done before then.

A Minjoo Party official said many of the People’s Party members will leave Ahn and boomerang back.

“That’s why we planned to revise the regulation that bars a defected member from returning to the party within one year,” he said.