Postponed talks on Thaad finally get off the ground

Postponed talks on Thaad finally get off the ground 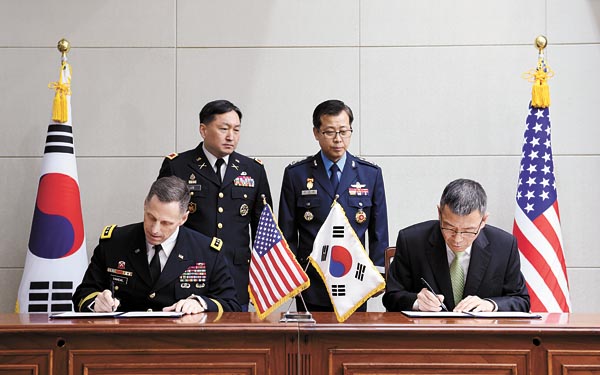 Seoul and Washington officially launched talks Friday on the deployment of the U.S.-led Terminal High Altitude Area Defense (Thaad) system in South Korea, a bolstering of their joint missile defense posture that has been fiercely protested by some neighboring countries.

The two sides signed a “term of reference” agreement in the morning and then convened the first meeting of a joint working group to discuss the details of the placement of the antiballistic missile defense system in South Korea, according to the Ministry of National Defense.

Initially, signing of the joint agreement was set for Feb. 23 but was delayed at the last minute in the midst of testy negotiations between China and the United States in Washington on a United Nations Security Council resolution calling for the strongest sanctions against North Korea in 20 years.

The agreement was signed between Yoo Jeh-seung, deputy minister for policy at South Korea’s Defense Ministry, and Lt. Gen. Thomas Vandal, commander of the U.S. Forces Korea’s Eighth Army, in Seoul at 10 a.m., to set the guidelines for the talks.

“The Korea-U.S. alliance, as a part of its efforts to develop its missile defense posture, will go forward with discussions on the possibility of the deployment of the Thaad system, which will be operated by the U.S. Forces Korea,” said Na Seung-yong, a deputy spokesman of the Defense Ministry.

A Defense Ministry official admitted the wording, “the possibility of the deployment of Thaad” took into consideration “opposition from China, who cooperated in the adoption of the UN sanctions resolution on North Korea.”

The official said, “The South Korean Defense Ministry’s position is that because of its outstanding military usefulness, the quicker the deployment of Thaad, the better it is.”

U.S. Secretary of State John Kerry said after talks with Chinese Foreign Minister Wang Yi last week that Washington was “not hungry or anxious to deploy Thaad,” downplaying the urgency of its deployment in South Korea. And Adm. Harry Harris, head of the U.S. Navy’s Pacific Command, said on Feb. 25 that the decision to start discussions on the placement of Thaad “is not necessarily a decision to do it, not yet.”

A Thaad missile defense unit comes with a powerful radar system that can cover more than 1,000 kilometers (621 miles), and Korea’s neighbors, particularly China, have expressed concerns that the radar could be used as a method of surveillance against them. Beijing protested that the placement of Thaad in Korea goes against its own “security interests” again on Friday through its Foreign Ministry spokesman Hong Lei.

The issue became a hot potato after Gen. Curtis Scaparrotti, commander of the U.S. Forces Korea, first confirmed publicly that Washington is considering deploying Thaad in South Korea to counter the evolving threats by North Korea at a forum in Seoul on June 3, 2014.

South Korea has avoided committing itself to the deployment of a Thaad battery, in part because of diplomatic concerns, but made a joint announcement with the United States on Feb. 7 - right after Pyongyang’s long-range missile launch - that it would officially begin negotiations on the placement of an antiballistic missile defense system here.

It is expected that the joint working group made up of around 10 military, legal and foreign affairs experts will discuss the location of the battery, the timing of its placement, safety and environmental concerns.

The cost of one Thaad battery comprising 48 interceptors, six truck-mounted launchers, a fire control and communications unit and an AN/TPY-2 radar is around 1 trillion won ($831 million), according to a defense official. However, additional interceptor missiles could raise the cost to 1.5 trillion won.