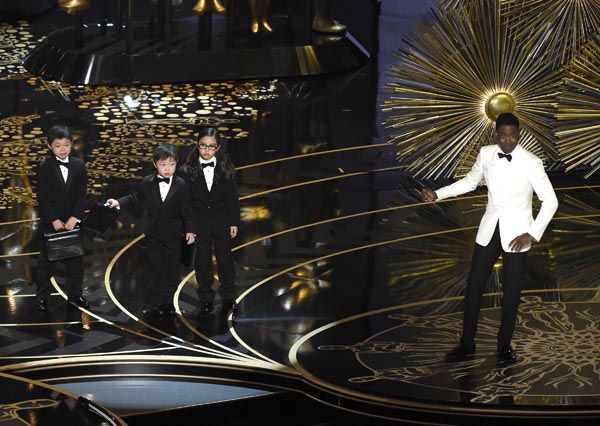 Host Chris Rock, right, gestures to three unidentified children portraying auditors in a skit at the Oscars at the Dolby Theatre in Los Angeles. Rock’s skit ignited an outcry from Asian-Americans and others angered by its stereotyping and, more broadly, frustrated by how non-black minorities are portrayed - or ignored - by Hollywood, especially movie studios. [AP/NEWSIS]

“It’s like going on a road trip with your fun friend, and halfway to Vegas he pulls over and shoots you in the leg,” Khan said, recalling her reaction to last weekend’s ceremony. “It was completely shocking and just so unnecessary.”

Rock’s skit ignited an outcry from Asian-Americans and others angered by its stereotyping and, more broadly, frustrated by how non-black minorities are portrayed - or ignored - by Hollywood, especially movie studios.

The response also has illuminated the gap between African-Americans, who have made some on-screen gains, and the lagging progress by other minorities, including Asian-American, Latinos and Native Americans.

Phil Yu, who observes Hollywood as part of his Angry Asian Man blog, said he welcomed the #OscarsSoWhite protest against this year’s all-white slate of acting nominees. But, as in years past, Yu said he was struck anew by the greater challenge Asian-Americans face.

“When I watch the Oscars as an Asian-American, I think, ‘It must be kind of nice to be disappointed that there were roles to be overlooked.’ I wonder what that feeling is like, because I can name no Asian-Americans that were in contention,” he said.

That perception is borne out by a comprehensive study released last month by the USC Annenberg School for Communication and Journalism.

At least half of all TV or streamed projects from September 2014 to August 2015 and of the 2014 films studied lacked even one speaking or named Asian or Asian-American character, the study found. By comparison, 22 percent didn’t include any such roles for black characters. Of lead characters that were minorities in 100-plus movies, nearly 66 percent were black and 6.3 percent were Asian.

In the U.S. population, African-Americans are a greater percentage, 12.3 percent, to about 5 percent for Asians.

But Rock’s attack on the industry’s diversity failures was fully black-centric, from one-liners to Black History Month skits. Then came the tuxedoed Asian-American kids, whom Rock presented as the “dedicated, accurate” accounting team that tallied Oscar votes, adding, “If anybody’s upset about that joke, just tweet about it on your phone, which was also made by these kids.”

Basketball player Jeremy Lin did just that. “Seriously though, when is this going to change?!? Tired of it being ‘cool’ and ‘ok’ to bash Asians,” he posted on his Twitter account.

Rock declined a follow-up interview through his publicist. And the Academy of Motion Picture Arts and Sciences, as well as the ceremony’s producers, did not respond to requests for comment.

Rock had company at the Oscars. Presenter Sacha Baron Cohen, in character as Ali G, made a sexually demeaning crack about “little yellow people.” Despite his pretense of talking about Minions, it was considered a slap at Asians.

Such humor, especially from the host, made the evening’s “relentlessly black and white” take on diversity even more disheartening, said Daniel Mayeda, co-chair of the Asian Pacific American Media Coalition. To an extent, that dual focus parallels the movie industry itself.

“There have been significant changes in television. Film is way behind,” said Mayeda, whose group is part of an umbrella organization, the Multi-Ethnic Media Coalition, that’s prodded the TV industry since 2000 to boost minority hiring and last month announced it was targeting movie studios to do likewise.

But there are specific biases and challenges to overcome, said Nancy Wang Yuen, a Biola University sociology professor who conducted a wide range of interviews for her forthcoming book, “Reel Inequality: Hollywood Actors and Racism.”

“One casting director told me the industry perceives Asian-American actors as inexpressive,” Yuen said. “If this is the kind of stereotyping against Asian-Americans as a race, then that really disadvantages them from being cast.”