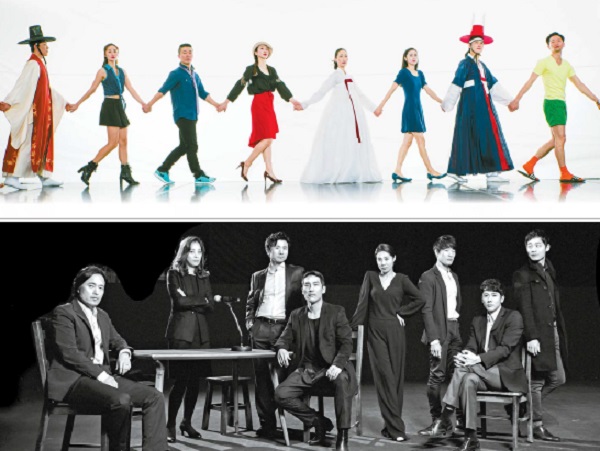 Top: “Shigane Nai,” jointly produced by the National Theater of Korea and Theatre National de Chaillot of France combines Korean traditional dance and French contemporary dance. Above: “L’Empire des Lumieres,” based on a Korean novel, addresses the division of the Korean Peninsula from an outside perspective. Both are being performed in Seoul this month. [NATIONAL THEATER OF KOREA, NATIONAL THEATER COMPANY OF KOREA]

Korea and France are in the midst of celebrating the 130th anniversary of diplomatic relations with “2015-2016 Korea-France Year.” About 300 projects have been planned to mark the occasion, encompassing the areas of cuisine, economy and even education.ㅇ

Among them, there are several unique experiments in creating new content by combining Korean and French culture, including “Shigane Nai,” a dance performance, and the play “L’Empire des Lumieres.” Through these projects, two countries are trying to understand each other through art.

“Shigane Nai” is a dance program co-produced by the National Theater of Korea and Theatre National de Chaillot of France. While such co-productions are a trend these days, this performance not only mixes the cultures of the two countries but also past and present styles.

The performance combines Korean traditional dance and contemporary dance of France. It also uses other tools to intrigue the audience, such as video art and disparate music - including Ravel’s “Bolero” - that aren’t normally associated with Korean dance. 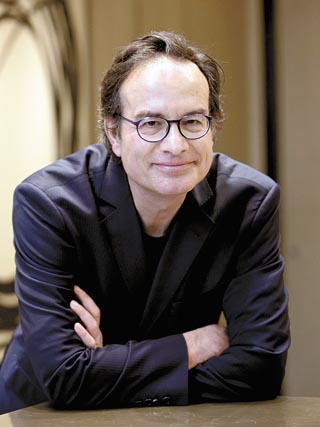 The theme of the performance is the interaction between past and present, and it also shows how contemporary arts can develop based on cultural content from the past.

“When I saw Korean dancers practicing, I felt something unique in their movements,” Jose Montalvo, the director and a choreographer of the performance, said in a press statement. “For example, they often danced in a slow tempo, while European ballet rarely does it.”

“What I did was to add some new elements to what they originally had,” he added.

Montalvo is a dancing supervisor at the Theatre National de Chaillot. His famous works include “Le Jardin Io Io Ito Ito,” which won the Laurence Olivier Award for Best Dance Production in 2001. His dancing style is often characterized as experimental, lively and energetic. His productions have been performed in Korea three times: “Paradis” in 1998, “Le Jardin Io Io Ito Ito” in 2002 and “On Danse” in 2006.

The National Dance Company of Korea, a traditional dance group affiliated with the National Theater, will perform the piece.

“At first, the dancers were confused because we had to break the tradition to some extent when working with the director,” Yoon Seong-cheol, a chief dancer, said. “However, later I felt that maybe there should be some room for further development.”

The performance also makes use of video, creating a unique interaction between the video, dancers and the audience.

“The audience may be able to expand their imaginations through the video,” explained Montalvo.

The performance will be held from March 23 to 27 in the National Theater in central Seoul. It will also be staged in Paris from June 16 to 24 at the Theatre de Chaillot.

Another cultural experiment that audience might want to experience is titled “L’Empire des Lumieres.”

It is a joint production between the Myeongdong Theater and Centre Dramatique National d’Orleans, and the play is a part of their project launched in 2013 to adapt contemporary novels into plays. Based on the novel “Empire of Light” by Korean author Kim Young-ha, the play is directed by Arthur Nauzyciel, who is an art director at the Centre Dramatique National and known for his experimental style. He visited Korea last year with the play “Splendid’s.”

The stage design, sound, video and costumes were also designed by French artists, while Korean actors will perform the piece. Moon So-ri, who is returning to the stage after six years, and Ji Hyun-jun, who left a strong impression in the play “The Crucible,” will play the main characters.

This performance aims to illuminate the issue of the division of South and North Korea from a foreign perspective. The play centers on a North Korean agent who was sent to South Korea. He has to leave his home of 20 years within a day. The play features him and other characters reminiscing about their lives.

The performance will be held from today to March 27 at the Myeongdong Theater in central Seoul. English subtitles will be provided during the performances on March 10, 13 and 27. In France, it will run from May 17 to 21 at Theatre d’Orleans.