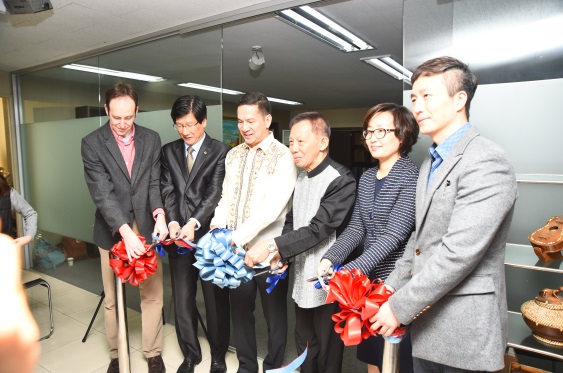 A Philippine cultural center sponsored by the Southeast Asian nation’s government was inaugurated Sunday at the Philippine Embassy in Yongsan District, central Seoul.

Sentro Rizal Korea, named in honor of the Philippine national hero Jose Rizal, who advocated for political reform during Spanish colonization, will serve as the embassy’s major platform for promoting Philippine art, culture and language.

Felipe de Leon, chairman of the Philippine National Commission for Culture and the Arts, made a special visit to Seoul for Sunday’s inauguration ceremony. He and Philippine Ambassador Raul S. Hernandez signed an agreement making the center official.

Sentro Rizal offices have been established around the world to educate children of overseas Filipinos about their roots, the embassy said in a press release.

Some 50,000 Filipinos are estimated to live in Korea, making it one of the largest foreign expatriate communities here.

Following Sunday’s ceremony, the embassy invited the public to a limited screening event at the War Memorial of Korea in Yongsan District, central Seoul, of two Philippine films that were noted for greatly impacting the country’s zeitgeist: “Bonifacio: Ang Unang Pangulo” (2014) and “Heneral Luna” (2015).