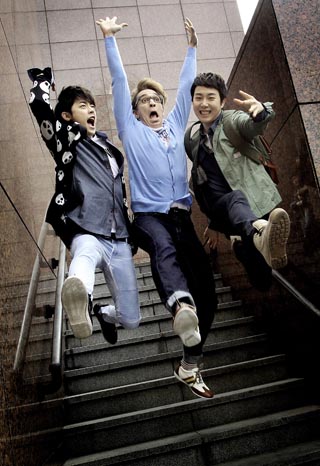 “Cherry Blossom Ending,” the hit song by “Superstar K” runner-up act Busker Busker, seems to have cemented its role as the signature song of spring in Korea by reappearing on the music charts once again.

Ever since its release in March 2012, the catchy tune has showed up out of the blue on music charts every year at the start of spring. The song has earned the nicknames “Spring Carol” and “Cherry Blossom Zombie,” a nod to its remarkable longevity.

Listed as the all-time most downloaded and streamed song on Mnet.com, the song, surprisingly or not, was ranked 23rd on MelOn, 16th on Olleh Music and 24th on Mnet.com as of Monday afternoon. Such steady popularity of this seasonal song is considered rare in a market where rankings tend to fluctuate a great deal with every new release.

Jang Beom-jun, the lead singer of the band, who both wrote and composed “Cherry Blossom Ending,” is reportedly working on his second solo album.

The TV show was originally a temporary show produced for the Lunar New Year holiday, but after it earned a satisfactory viewership rating, MBC announced its inclusion in the regular program schedule.

“The two TV personalities were behind the success of the show,” MBC said about Sung and Yoo, adding, “Not only did they play off each other well, but they made the contestants’ performances better.”

“Duet Festival 8+” pairs up singers with members of the audience, who then face off against other two-member teams.