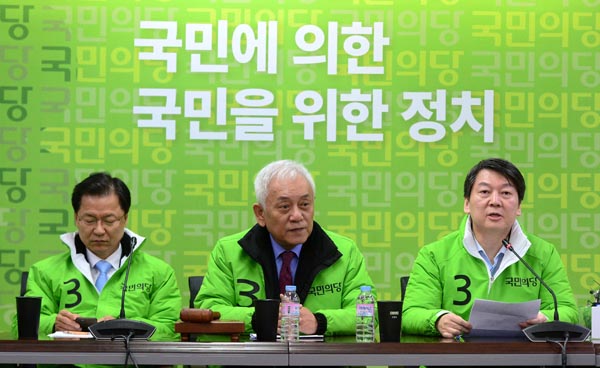 Ahn Cheol-soo, co-chairman of the People’s Party, right, speaks during an election strategy meeting on Monday. Leaders Kim Han-gill, center, and Chun Jung-bae sat with Ahn, but presented different opinions on how their newly formed party must react to the main opposition party’s proposal for a merger before the April 13 general election. [NEWSIS]

The chasm between Ahn Cheol-soo, founder of the People’s Party, and fellow party leaders grew wider Monday as they clashed publicly over a proposed merger with the main opposition Minjoo Party of Korea.

In a meeting held to discuss the April general election, now just 36 days away, Kim Han-gill, the party’s chief campaign manager, was anything but supportive of Ahn’s firm decision not to unite with the Minjoo Party and publicly doubted his political judgement.

“In politics, we need to consider the nation and its people,” said Kim. “If we weren’t trying to block the ruling party [Saenuri] from winning enough seats to unilaterally amend the constitution, then it would be fine for our party to die in the wilderness.”

A constitutional amendment requires two-thirds support from the National Assembly.

Kim’s remarks were a direct jab at his co-chairman’s emotional announcement Sunday quashing any possibility of a merger with the Minjoo Party. Ahn said he would rather “die in the wilderness” as a People’s Party member.

Ahn was in the same meeting Monday and reiterated his rejection of a merger, saying he trusts the voters not to allow the Saenuri Party to earn 200 seats or more, enough to pass a constitutional amendment on its own.

Yonhap News Agency reported that Kim told journalists after the meeting that he thought the party seemed “too lackadaisical” about the possibility of a worst-case scenario - at least 200 Saenuri seats in the assembly - and that his openly critical comment about Ahn was “something not worth talking behind closed doors.”

Chung Jung-bae, a co-chairman of the People’s Party, echoed Kim’s statements after the meeting, telling reporters that the nation would face the state of a “Hell Joseon” if Saenuri gained the power to unilaterally approve bills.

“Hell Joseon” is a newly coined term that refers to how tough life in Korea is.

The merger proposal, initially introduced by Kim Chong-in, the interim leader of the Minjoo Party, dates back to last Wednesday when he invited politicians who abandoned the party earlier to return. Ahn himself defected from the party late last year amid a rupture with then-Chairman Moon Jae-in.

Ahn has repeatedly turned down the offer, saying his main goal is to make Korea a three-party system. Some other representatives within his party have contended that the party’s goal should be to block the Saenuri Party from gaining a majority, even if that requires a merger or an electoral alliance.

In the latest Realmeter poll conducted from Feb. 29 to March 4, the People’s Party saw 11.5 percent support, down 0.6 percent from the week before and way behind Saenuri Party’s 43.7 percent and the Minjoo Party’s 28 percent.

When asked who would be the next Korean president, Ahn came in fourth with 9.9 percent, down from 11.1 percent the previous week. The latest results had made him switch ranks with former Seoul Mayor Oh Se-hoon of the Saenuri Party, who earned 9.8 percent of votes.

The first three were Moon Jae-in of the Minjoo Party with 19.6 percent, Saenuri’s Kim Moo-sung with 16.5 percent and Oh.

Meanwhile, with another member joining the group Monday, the People’s Party currently has 19 lawmakers.