Ssangyong takes to the Air to catch more SUV sales

Ssangyong takes to the Air to catch more SUV sales 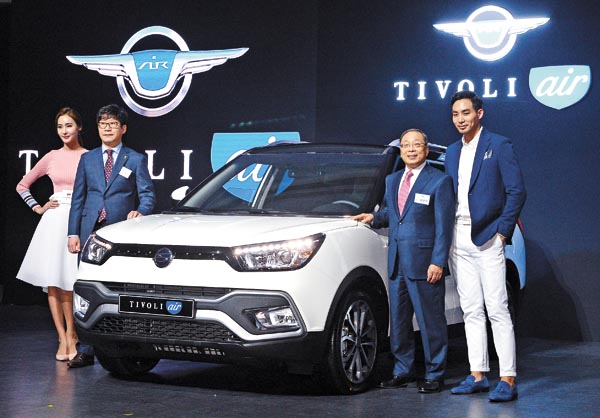 Ssangyong Motor, which dramatically improved its sales last year with the Tivoli small-size SUV, rolled out the Tivoli Air on Tuesday - a long-body version of the popular model - joining the battlefield of the nation’s toughest auto market.

In the launch event held at Some Sevit in Banpo-dong, southern Seoul, the nation’s smallest automaker unveiled the five-seat Tivoli Air, which is 238 millimeters (9 inches) longer than the Tivoli small-size SUV.

The company made some design changes on the exterior side walls and rear bumper of the car and kept the automaker’s signature radiator grille, which the company said embodies the image of a flying bird’s wings.

The Air has an e-XDi 170 diesel engine, the same as the smaller Tivoli, which offers 115 horsepower and 30.6 kilogram-meters (221.3 pound-feet) of torque with a six-speed automatic transmission developed by AISIN. It also has 720 liters (25 cubic feet) of trunk space.

Although the Tivoli Air is bigger, it will continue to compete in the compact segment that is currently led by Hyundai Motor’s Tucson and Kia Motors’ Sportage.

Still, Ssangyong has pinned its hopes on the Air this year since this is the only new vehicle scheduled to be launched this year.

“We aim to sell 95,000 Tivoli series in the global market this year and about 25,000 of those sales to be made with the Air,” Ssangyong CEO Choi Johng-sik said. “With the success of the Tivoli last year, I think the company definitely showed its competitiveness as a decent SUV maker, and in order to keep performing like this, we have planned to roll out one new car every year after the Air.”

Choi said that the company expects to continue riding high with the Air like it did last year. The smaller Tivoli was a key model that helped Ssangyong turn a profit in the fourth quarter last year, with 21.8 billion won in operating profit, the first profit in eight quarters. The automaker sold about 63,000 units of the Tivoli last year, accounting for about 45 percent of Ssangyong’s entire sales.

“It is important what the [mother company] Mahindra thinks, but we have been working on those financial issues since we decided to develop the Tivoli,” said Vasudev Tumbe, vice president and CFO of Ssangyong.

With the Tivoli joining in, the competition in the local SUV market that was once led by foreign automakers such as Mercedes-Benz, BMW and Audi is tougher than ever.

Later this month, the nation’s second-largest automaker, Kia Motors, will join the battle with a new hybrid SUV, Niro, which will also offer a similar body size and price options. On Tuesday, Toyota Korea also launched a new Rav4 hybrid SUV in Seoul that offers 13 kilometers per liter of fuel efficiency.

The reason that automakers are competitively rolling out SUVs early in the year is their growing popularity. In 2012, only 21.8 percent of cars sold in Korea were SUVs, but that figure rose to 35.3 percent last year thanks to low international oil prices. “The popularity of SUVs isn’t just happening in Korea,” said Choi Jong-won, a researcher from the Korea Automotive Research Institute. “More new segments could be created in the SUV category as automakers are trying to separate vehicles with more details by reflecting consumer trends.”