Agencies aim to cash in as F-4 visa seekers rise

Agencies aim to cash in as F-4 visa seekers rise 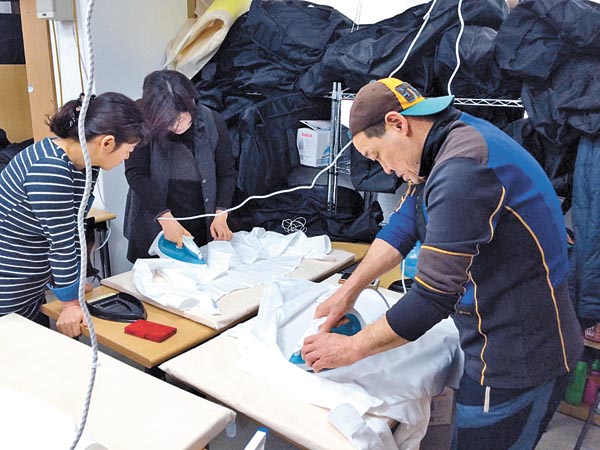 There are approximately 70,000 Chinese-Koreans residing in Daerim-dong, in Yeongdeungpo District, southwestern Seoul.

They have flocked to the neighborhood in droves since 2012, when the Ministry of Justice eased the criteria to qualify for the F-4 visa for overseas nationals. The neighborhood has also seen a rise in the number of vocational private academies aiming to attract Chinese-Koreans seeking F-4 visa status.

Overseas nationals with this visa can stay in Korea permanently as long as they renew their visas once every three years. Initially, only Chinese-Koreans working in specialized positions, like doctors or lawyers, were eligible to apply.

However, once the Korean government eased the criteria to allow eligibility to certified technicians, the number of Chinese-Koreans with F-4 visas has skyrocketed, from 74,014 in 2011 to 208,312 in 2014. 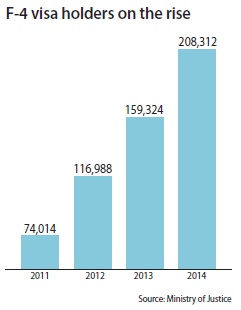 There are over 30 private academies that provide vocational training for people seeking to acquire F-4 visas.

At one private academy that trains dry cleaners and cooks, about 20 Chinese-Koreans were preparing on a recent day for the practical exam to acquire a dry cleaning license, ironing white collared shirts.

“For the past 20 years I’ve lived in Korea, I had to re-visit China every three years because of visa issues,” said a 49-year-old Chinese-Korean surnamed Yu. “If I acquire a license and get an F-4 visa, I wouldn’t have to go through the hassle anymore.”

“Over 90 percent of the students at this private academy are Chinese-Koreans,” the school’s director added.

Most of them came to acquire a license merely for the purpose of receiving an F-4 visa, rather than learning the skills necessary for a new trade, according to the director of a cooking academy near a community service center in Daerim-dong.

“Among the 116 licenses available to acquire an F-4 visa, my academy teaches the trades that are most easily obtainable, like baking, cooking Korean cuisine, raising mushrooms and organizing data,” the cooking academy director added.

The academies receive students introduced by travel agencies and immigration-related administrative offices, and it’s become customary for private academies to pay fees to the agencies to acquire more students.

“At first the reference fee was about 40,000 won ($34) to 60,000 won per person but now the price has gone up to about 300,000 won to 400,000 won,” according to the owner of a private academy. “Even if the number of students increases, the academy barely gets anything out of the business after paying the reference fee.”

Some administrative agencies have also reportedly asked the schools upfront how much they are willing to pay per student, another private academy owner said, and while it puts them at a disadvantage, they often have no choice but to pay a premium if they want more students.

There are about 180 travel agencies and administrative agencies that deal with visa-related concerns in Daerim-dong.

“We initially introduced the students for free, and it was the academy owners who offered to pay us for introducing Chinese-Koreans to their academies, so it’s not right for them to criticize us,” said a worker in an administrative agency.

The monetary transaction between the private academies and the agencies is illicit and remains an issue the government has yet to handle.

“Because the transactions are made in cash, it’s difficult for the government to track down and regulate the illicit exchanges,” said an official from the Nambu District Office of Education Seoul.

“It’s a pity that the regulation, which was intended by the government to help overseas Koreans become self-reliant, is only used for the purpose of acquiring a visa in Korea,” said a private academy worker.