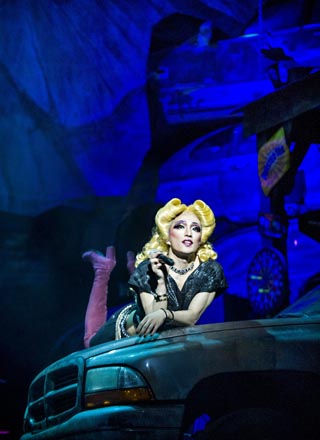 To Sunday: While opera fans might be familiar with the “Turandot” composed by Giacomo Puccini, this performance is in fact a Korean-made musical with the same title. The show is coming to Seoul after previous successes in Daegu, Gyeongsang and China, starring musical actresses Park So-yeon and Lisa and singer Ali alternating as Turandot. Unlike the opera, which takes place in China, the musical is set in an underwater palace.

Loosely based on the legendary story by Mary Shelley, it tells the tale of scientist Victor Frankenstein, who, at the height of the Napoleonic Wars, befriends Henry Durpres. Together, they attempt to create “an immortal soldier,” but the experiment goes awry, and a monster is born. Actor-singer Yoo Jun-sang, who won the award for Best Male Leading Actor in 2014, is again playing the role of Frankenstein.

Friday to April 24: First staged here in 2012 with the title “Mozart Opera Rock,” the original French version is now coming to Korea for the first time. Directors Albert Cohen and Dove Attia are famous for their productions of hit musicals “The Ten Commandments,” “Le Roi Soleil” and others.

Ok Joo-hyun, a musical actress who was once a member of Fin.K.L, a first generation K-pop girl group, and Kim So-hyang are playing the lead role.