‘Sun’ shines at home and in China

‘Sun’ shines at home and in China 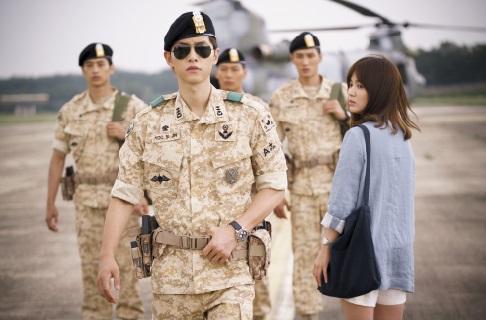 Actor Song Joong-ki, center front, and actress Song Hye-kyo, right, star in the latest drama on KBS2, “Descendants of the Sun,” which is airing both in Korea and China. [KBS]

The recent drama series “Descendants of the Sun” has been inspiring lust among both Korean and Chinese women by featuring heartthrob Song Joong-ki, 30, who just returned to the screen after finishing his military service, as an on-screen Special Forces captain.

After airing only two episodes, this Korean-Chinese co-production quickly became the talk of the town, attracting more viewers with each episode. The fourth episode, which aired last Thursday on KBS2, recorded a viewership rating of 24.1 percent, and insiders predict “Descendants of the Sun” will easily surpass the record of 2014 megahit series “My Love from the Star,” which finished its run with a viewership rating of 28.1 percent, ready to become the next biggest K-drama hit.

As the drama has already completed shooting and editing, becoming one of the few “early filming” dramas in Korea, it was possible to complete the necessary censoring before airing in China. This made it possible for the drama to air in the communist country just an hour after airing in Korea.

Korean dramas are usually filmed and edited as the writer continues to write the screenplay. Although “early filming” is convenient for both producers and actors, producers are said to be hesitant to adopt the method because most early filmed dramas before “Descendants of the Son” were not very successful.

In China, where the distributor is reported to be paying about $250,000 per episode, the first episode of “Descendants of the Sun” garnered over 30 million views the day it was uploaded on the Chinese online video platform iQiyi. And after the fourth episode was uploaded last Thursday, it attracted 130 million views that night.

Song playing the lead has definitely contributed to the drama’s popularity, but experts say there is more than his pretty face behind the drama’s success.

The romantic story is not unlike many other Korean dramas, but the setting involving Korean troops deployed overseas is unique.

“Those in their 40s are exposed to a lot of Japanese and American dramas, so they tend to be attracted to a new setup that is not familiar in Korean dramas,” said Jeong Duk-hyun, a culture critic. “That is why I think this drama that uses the military and deployed troops as one of its components attracts such audiences.”

Song’s character in “Descendants of the Sun,” Capt. Yoo Shi-jin, is far from gentle. He sometimes gets too prickly, but inside, his heart is tender. It seems like he lets unnecessary words fly when speaking to Song Hye-kyo - who plays the pretty doctor Kang Mo-yeon - when he could just kindly ask her on a date. But behind her back, he secretly tries hard to surprise her with romantic dates and keep a close eye on her to protect the girl he loves.

Similar characteristics can also be seen in actor Jin Goo’s character Seo Dae-young, a sergeant major in the drama. He loves his female superior, First Lt. Yoon Myung-joo - played by actress Kim Ji-won - but tries to keep away from her as her father, Lieutenant General Yoon, disapproves of their relationship. It looks at first like Dae-young is not manly enough, forcing Myung-joo to chase him, but in crucial moments, he becomes more masculine.

The male protagonists in Kim’s previous works like “A Gentleman’s Dignity” (2012) and “The Heirs” - played by Jang Dong-gun in the former drama and Lee Min-ho and Kim Woo-bin in the latter - all have similar characteristics of seeming icy cold on the outside but having the warmest heart inside.

Her male characters are also straightforward when it comes to confessing their love. In “Descendants of the Sun,” when Shi-jin encounters Mo-yeon for the first time after many months, he says without seeming shy or hesitant that he wants to be with her and orders her like he does his troops, saying, “You should worry about nothing but me from now on.”

And when these men kiss their lovers, they do so unexpectedly, surprising both the female characters and the viewers. Dae-young also tells Myung-joo in the same drama when he has to leave her behind in Uruk, Iraq, to just “be careful of the mosquitoes” with no emotion on his face. But then when she walks past him, he suddenly grabs her from behind and hugs her.

Actor Lee Dong-gun while playing Yoon Soo-hyuk in “Lovers in Paris” famously told his crush, Kang Tae-young - played by actress Kim Jung-eun - “You are in here,” while pointing his finger at his heart. Lee Min-ho’s character in “The Heirs” also left an impression when he asked the female character Cha Eun-sang - played by actress Park Shin-hye - “Do I like you?”

“I know that the lines in the drama are very different from reality,” said one female “Descendants of the Sun” viewer in her 40s. “But I get so absorbed in the male characters and their straightforward lines.”