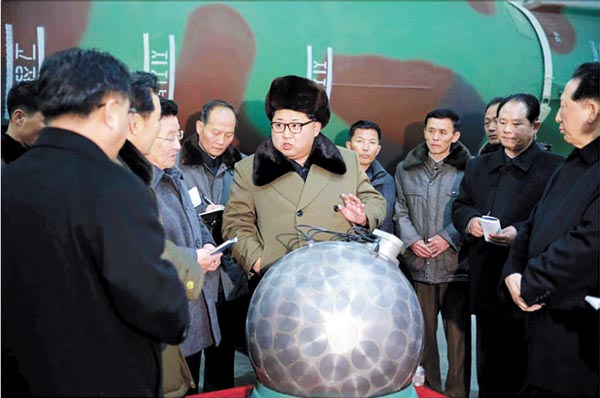 In this photo carried by the Rodong Sinmun on Wednesday, North Korean leader Kim Jong-un appears with what was identified as a miniaturized warhead. [NEWSIS]

North Korea has already vowed to launch a preemptive nuclear strike against the two allies over joint military exercises that started on Monday, asserting that the North’s nuclear capabilities can reach as far as the U.S. mainland.

“The nuclear warheads have been standardized to be fit for ballistic missiles by miniaturizing them,” the North’s official Korean Central News Agency (KCNA) quoted Kim as saying. “This can be called true nuclear deterrent.”

It was the first time the North Korean leader confirmed his country’s capabilities to make nuclear warheads small enough to be mounted on ballistic missiles, though the state media has made such claims before. Analysts have taken those claims with skepticism.

“If the U.S. imperialists infringe upon the DPRK’s sovereignty and right to existence with nuclear weapons, the latter will never hesitate to make a preemptive nuclear strike at them,” Kim said during his visit to an unidentified nuclear development center. DPRK is short for the Democratic People’s Republic of Korea, the official name of North Korea.

The KCNA did not disclose the exact time of Kim’s visit.

The Rodong Sinmun, the official newspaper of the North’s ruling Workers’ Party, released photos of Kim’s visit showing him with a supposed warhead, along with an illustration of how the warhead fits on an intercontinental ballistic missile.

The warhead shown was a round silver object measuring less than a meter in diameter.

A South Korean military official told Yonhap News that the object appeared to be a mock-up rather than an actual miniaturized nuclear warhead.

Jeong Joon-hee, a spokesman for the South’s Ministry of Unification, said at a briefing that the South Korean government believes North Korea has the capability of miniaturizing warheads to some degree.

The Ministry of National Defense said Wednesday that it did not believe the North Korean leader’s claim.

“The claim is North Korea’s ‘final leverage’ to start a conversation with the United States, as the country has been blocked by international pressure,” said Kim Kyung-min, a political science professor at Hanyang University.

He believes the North has been able to reduce the size of its atomic weapons after four nuclear tests since 2006, including one in January.

But North Korea has not proven its capability to make a missile that can carry a warhead an altitude of 1,000 kilometers (620 miles) and re-enter the earth’s atmosphere, Kim said, which is essential to attack the U.S. mainland.

On Tuesday, the South Korean government announced a fresh set of unilateral sanctions on North Korea to curb its development of weapons of mass destruction that included a blacklist of 40 individuals and 30 entities.