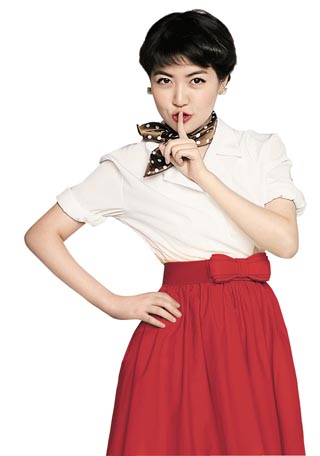 Localized versions of the 2014 Korean film “Miss Granny” starring Shim Eun-kyung, above, is becoming a hit across Asia. [CJ E&M]

“Miss Granny” is a Korean film released in 2014, targeting the domestic audiences.

With Shim Eun-kyung in the lead, the film follows the story of a goofy granny in her 70s who one day wakes up in the body of a 20-year-old.

With her new body, she explores the joy of youth that she had to sacrifice for her family.

When it was released, the film sold a satisfying 8.7 million tickets in Korea, earning 62.7 billion won ($51.7 million) and making it one of the top five Korean movies released that year.

A scene where the female protagonist aggressively swings an object in her hand at a mysterious guy who has been following her appears in every version of “Miss Granny” released so far, but that object differs according to each country. For example, in the Chinese and Vietnamese versions, left and center, it’s a radish, whereas in the Japanese version it becomes a kitchen spatula.

However, the film’s popularity goes far beyond its home turf.

In China and Vietnam, the localized versions of the film have broken several records, and there are more remakes planned for Taiwan, Indonesia, India and Germany in the near future. The Japanese version is set to be released in April.

The Chinese version, which was released under the title “20, Once Again!” in 2015, garnered 12 million moviegoers, making it the highest-grossing Korean-Chinese film of all time.

And last year, the Vietnamese version grossed 5.9 billion won, becoming the most successful film of all time in the cinematic history of the Southeast Asian country.

“Miss Granny,” the pioneer in Chinese-Korean film, a breakthrough genre in Korea’s saturated movie market, is a story that evokes nostalgia, touching on universally sympathetic issues such as familial love and longing for beauty and youth. These are among the main reasons for the film’s successes abroad.

However, even more important, experts say, were the variations each film underwent in order to reflect the culture of each country.

Going beyond the original format of remakes, which stopped at merely replacing the original cast with local actors, the international versions of “Miss Granny” made bold changes to adapt to local culture and film trends.

“It is more than merely remaking the film we have, but we dig deeper into the culture and carry out research starting from the pre-production stage,” said Jeong Tae-sung, head of the film division at CJ E&M, the movie’s production company.

Below is a detailed look at how each film was changed in order to more adeptly cater to local audiences.

“20, Once Again!” the 2015 Chinese version of the movie, was simultaneously produced with the original, meaning that China was treated as more than just a secondary market for the film.

While the project’s core elements including the retro vibe, the family focus and a good dose of humor were faithfully maintained, CJ E&M didn’t hesitate to make bold changes in order to maximize the cultural suitability.

For example, in place of the original version’s theme song “Go to Los Angeles” (1978) sung by trot singer Kwon Sung-hee, which played a vital role in giving the film a retro feeling, “20, Once Again!” used the songs of Deng Li Jun, a Chinese singer who used to be popular during the 1970s and ’80s.

Also, the film inserts a clip from the megahit Chinese drama series “Emperor’s Daughter” (1997-2003) as well as showing a scene of people playing mahjong, a type of traditional board game that originated in China.

And when the film shows the protagonist realizing her body changed while group-dancing in a park, whereas the original scene took place in a jimjilbang, or Korean dry sauna, it becomes clear the producers took the cultural differences into consideration. On top of that, the romantic aspects were augmented since the genre is highly well-received in the Chinese film scene.

While romance and nostalgia were the focus of the Chinese adaptation, comedy was at the forefront in Vietnam.

The amount of slapstick and plays on words was greatly increased in this 2015 version of the film, titled “Sweet 20,” so much so that local comedians were cast in the movie.

Scenes showing the characters accidently falling down, pulling down each others’ pants and spitting out food that wouldn’t be well-received in Korea were a big hit with local theatergoers.

The country’s unique history was another element emphasized when adapting the original screenplay for the Vietnamese market.

While the Korean version emphasized the protagonist raising her family against all odds, the third adaptation adds an episode showing her husband leaving for Vietnam War, and then later the arrival of a letter notifying her of his death on the battlefield.

Critics point out that to Vietnamese audiences who were used to the genre of comedy alone, the mix of humor with tear-jerking scenes would have been a fresh experience at the theater.

The upcoming fourth version of the film stars up-and-coming actress Mikako Tabe, who also has a considerable following in Korea for films such as “Midnight Diner” (2015).

The Japanese version opens by showing the protagonist running away from her house after getting into severe fight with her daughter, who is raising a child alone. The situation is based on a growing social phenomenon in Japan in which the number of single mothers is increasing.

And while the main character of the original version says her ideal type of a man is one who is good at doing “night jobs,” the Japanese version changes the line to one “who can serve me well when I can’t control relieving myself.” The joke is based on the fact that the population of Japan is aging rapidly.