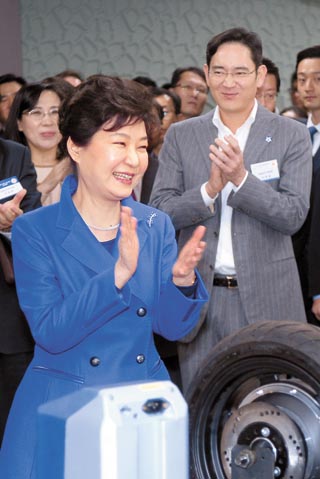 A little over a month ahead of April’s general election, President Park Geun-hye headed to Daegu, where many of her loyalists are planning to run, and included a stop in Dong District, the turf of Rep. Yoo Seong-min, a onetime ally who fell out of favor with her last year.

Park’s first stop was at the Daegu Center for Creative Economy and Innovation in Dong District, which the Blue House said was part of the president’s policy of fostering a more creative Korean economy.

“The purpose of this visit was to encourage economic revitalization and job creation,” a Blue House official said, “and review results, especially through support of day care and innovative manufacturing.”

The official added, “On March 8, the president said in a meeting with her senior secretaries, ‘In the future, whenever there is an opportunity, I will visit the location of a creative economy center and review it.’”

It was the president’s first visit to Daegu in six months and came as some of her political supporters in the city are facing nomination challenges in key districts by members of rival factions in the ruling Saenuri Party.

Yoo, former floor leader of the ruling Saenuri Party and a third-term lawmaker, plans to run for re-election in Dong B District on April 13.

But Yoo fell out of grace with Park last June over his support of a revised National Assembly Act, and he is expected to be challenged by Park supporter Lee Jae-man, former Daegu Dong District head.

The president’s visit to Daegu was seen as support for Lee, one of the so-called “Park Geun-hye kids,” and a reminder of her contempt for Yoo.

In an attempt to get the president’s plan to overhaul the civil servants’ pension system last year, the Saenuri Party made a political deal with the main opposition party to revise the National Assembly Act, accepting its demand that the parliament have the authority to revise regulations created by the administration, including presidential decrees.

At the time, the opposition New Politics Alliance for Democracy was hoping to change an enforcement decree for the special law governing the investigation of the sinking of the Sewol ferry in April 2014.

This infuriated Park, who vetoed the bill on June 25, and she lashed out at Yoo, the Saenuri Party floor leader at the time, condemning him for “politics of betrayal.”

Yoo consequently stepped down from his position.

Chong Jong-sup, the former interior minister who is considered another “Park Geun-hye kid,” is eying Daegu’s Dong A District, which is currently represented by the Saenuri Party’s Ryu Sung-gul, a former vice finance minister.

Park also made visits to the International Textile Fair at EXCO and the Daegu Athletics Promotion Center.

A National Election Commission official said there was no political interference problem with Park’s visit to Daegu regarding the upcoming general elections.

“We determined this will not cause any violation of election laws,” the official said.