With an eye on retirement, Koreans switch banks

With an eye on retirement, Koreans switch banks 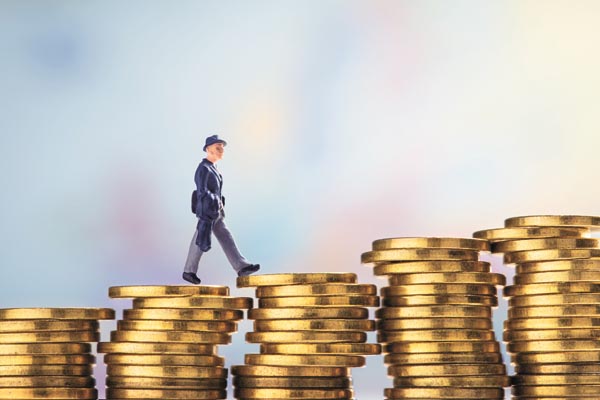 More than 890,000 Koreans - mostly those nearing retirement age - switched their bank accounts to another institution in the first week of a new government-led system.

The third phase of the automatic account transfer system that started on Feb. 26 allows customers to switch their main bank accounts and automatic payments from their current bank to a new institution of their choice, either online or offline. 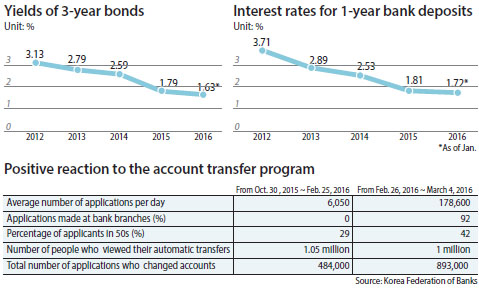 A notable trend in the exodus was that more Koreans in their 50s reacted positively to the government-led account changing system, with people over 50 accounting for 42 percent of the total number who decided to change.

Before the change, consumers could only change bank accounts where they wanted to set automatic payments exclusively on a website called “Payinfo.” The website enables subscribers to view information on bank accounts and automatic money transfers. 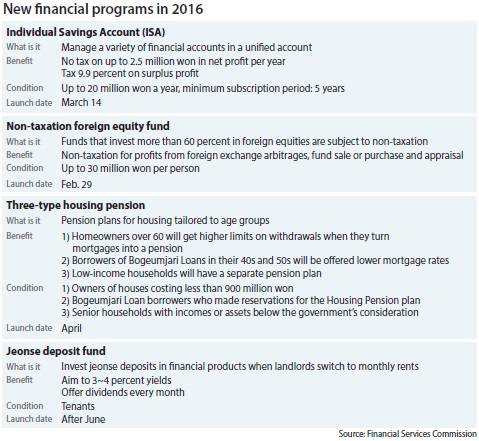 The expansion of the capability into the normal banking world appears to appeal more to older customers who are less tech-savvy.

The Financial Services Commission (FSC), which spearheaded the change, was surprised by the response from consumers.

“The first one week showed much higher figures than expected,” said Lee Yun-soo, director of the banking sector at the FSC.

The so-called “Money Move” trend is being led by Koreans who are nearing retirement and hunting for financial products offering higher interest rates - even 0.1 percentage points higher - in an era of the lowest benchmark interest rate.

Major commercial banks are attempting to attract customers with up to 0.5 percentage point higher rates.

The Bank of Korea kept its key rate at 1.5 percent on Thursday for the ninth consecutive month.

The latest trend coincides with the government’s efforts to make reforms across the financial market, with a main focus on developing innovative financial products to boost the industry’s overall competitiveness and improve customer convenience.

The FSC is going to roll out four types of new or revised financial programs this year to help stabilize the financial activities of ordinary households by helping lessen the debt burden and increasing tax benefits or investment returns.

The authority has already introduced non-taxation benefits for products that invest more than 60 percent of funds in foreign equities. Appraisal returns and foreign exchange returns from the funds will not be taxed for up to 10 years.

The funds grabbed a lot of attention from consumers, according to data by the Korea Financial Investment Association.

As of March 3, a total of 28.2 billion won ($23.7 million) was invested in 11,643 accounts that were newly created since the tax benefit was put in place. Largely, funds that invest in equities in advanced markets such as the United States and those investing in the Vietnamese market attracted most of the new investors.

The movement of capital in the local market is due to the latest conditions that pull down yields of financial products.

“Indeed, there is almost none that produced reasonable returns since last year,” said a head of the private bank branch of KEB Hana Bank.

“To double the principal with an annual rate of 1 percent takes 72 years,” said Kim Jin-young, managing director of the trust pension department at Shinhan Bank. “The magic of compound interest rates has ended.”

Investors have now lowered their expectations and started accepting the market situation combined with the low interest rates, low growth and low inflation.

“Those investors are now diversifying types of assets and seeking modest return ratios or opting for tax benefits as part of post-retirement preparations,” said Cha Eun-joo, a senior manager at the wealth management department of Samsung Securities.

To satisfy investors’ appetites, the individual savings account (ISA) program will launch today at all banks and securities brokerages.

The ISA system allows consumers to manage all kinds of financial accounts, ranging from regular bank savings to riskier securities accounts, in a single, comprehensive account. The government imposes no tax on up to 2.5 million won in net profit from investments made in the account system per year.

The upcoming launch of three housing pension plans in April is also going to help more people own a residence with less financial outlay by loosening the current qualifications for subscribing to the Housing Pension.

The new changes in the financial market can be both an opportunity and a challenge for senior citizens.

To take advantage of the new programs, consumers need to learn about finance, experts advise. For example, there is no need to put an equity-type fund that is not subject to taxation into the ISA. And they also need to compare tax benefits with fees that they should pay to management firms. Sometimes, the fees can be larger than the tax benefits.

Since 2011, financial companies have been rolling out so-called retirement marketing activities, targeting retail investors who are seeking higher yields as interest rates keep going down as part of a global phenomenon.

The companies actively marketed aggressive investment products such as derivative-linked securities, equity-linked securities and inflation-indexed government bonds. A number of people nearing retirement age, which has recently been raised to 60 by law, were enticed by the products. However, many of them were unaware of what exactly the products offered.

“Still, there are many consumers [especially among senior people] who subscribe to complex financial products without sufficient knowledge,” said Oh Yoon-hae, a research fellow at the Korea Development Institute. “Asset management becomes more important amid fast aging, while products are becoming more complicated. Consumers need to be more versed in financial products.”