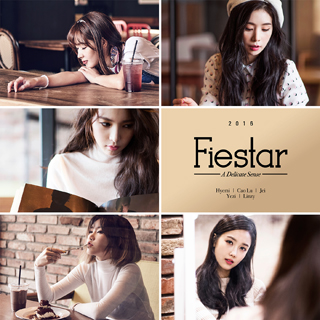 
The K-pop girl group Fiestar is back after a year with their second EP, “A Delicate Sense,” which was released earlier this month. They have been getting renewed attention nowadays since their debut with the 2012 album titled “Vista.”

The album contains five songs that demonstrate a woman’s emotions when she encounters her love and heartbreak - the title song “Mirror” explains just that. In the song, Yezi’s soft rap is quite surprising because she had shown a powerful rap style in “Unpretty Rap Star Season 2,” a rap survival competition where she showed off her artistic talent.

The tracks were produced and composed by stars in the music scene. For example, “Thirst” is produced by Sam Lewis and “Mr. Black” was composed by Lee Chae-gyu, both of whom are known for their work on numerous K-pop hits.

Fiestar seems to know which style they fit in best with. Similar to their previous EP, “Black Label,” they continue to emphasize their alluring and sexy vibes but with an upgraded quality of songs and performances.