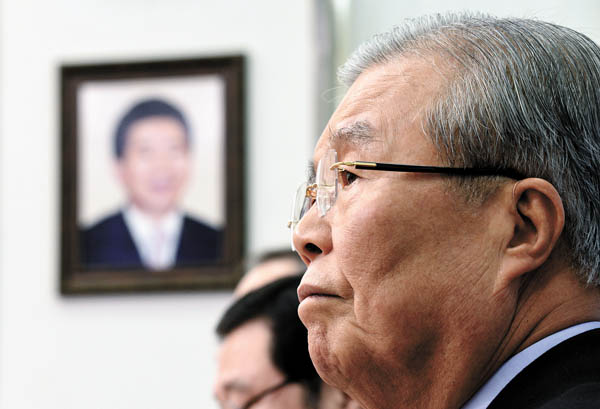 Kim Chong-in, the interim leader of the main opposition Minjoo Party of Korea, appears in deep thought Monday at a party meeting at the National Assembly. The nomination management committee of the opposition party announced that Lee Hae-chan, a former prime minister and six-term lawmaker, will not be nominated in next month’s general election.[NEWSIS]

The main opposition Minjoo Party of Korea decided Monday that Lee Hae-chan, a former prime minister and six-term lawmaker, will not win a nomination in next month’s general election, furthering its strategy of fielding new faces to reinvent the party while dropping established old-guard party members.

In addition to the 63-year-old veteran lawmaker, the Minjoo Party announced Monday a list of lawmakers who will also not win nominations in the April 13 general election. The party said Lee’s district, Sejong City, is a strategic constituency, where the leadership will select its candidate without a primary.

A political godfather for loyalists of the late President Roh Moo-hyun, Lee began his political career in 1988 after winning his first term in the National Assembly. After winning two more elections, he worked as a minister of education for the Kim Dae-jung administration from 1998 to 1999.

In November 2003, Lee became chief of the newly founded Uri Party, comprising Roh loyalists, after which he won his fifth term in 2004 under the new party’s title. From 2004 to 2006, he served as prime minister under the Roh administration.

In 2007, the Uri Party merged with the Democratic Party, which became the Minjoo Party in 2015, one year after Lee won his sixth term to represent Sejong City. That year, he also briefly served as the Uri Party chairman.

Given Lee’s central role throughout the party’s history, the decision not to nominate him, made by Kim Chong-in, the Minjoo Party’s interim leader, as well as other senior members, came as a shock to many. Kim and others have pressured Lee to retire from the political front lines for some time, but made no overt moves to oust him until now; the mood evidently changed over the weekend after Lee made public his bid.

On Saturday, Lee opened a campaign office in Sejong, declaring, “I cannot retire from politics because I cannot look away from the mission of the liberal victory in the presidential election.”

Following this move, Kim, who previously told his associates that the party must give the elder statesman more time to make his own decision, changed his mind and announced the decision to eliminate Lee from the nomination.

“Even if the worst-case scenario presents itself, and we lose a seat in Sejong, the elimination of Roh loyalism will make a greater impact in the overall election,” a Kim associate said.

In response to the decision, roughly 1,000 Lee supporters staged a protest outside the Minjoo Party’s headquarters in Yeongdeungpo District, western Seoul.

Moon Jae-in, a former Minjoo Party chairman and kingpin of its Roh faction, remained tight-lipped about Lee’s elimination. In January, Moon relinquished all his power, including the right to nominate, to interim leader Kim in order to help reinvent the party’s image as a fresh liberal force in time for the April 13 general election.

This makeover began with the riddance of 10 of its 108 lawmakers in February, including several key Roh loyalists: five-term lawmaker Moon Hee-sang, twice the interim head of the party, four-term lawmaker Shin Geh-ryoon and three-term lawmakers Yoo Ihn-tae and Noh Young-min.

The National Assembly has 300 seats, 253 of which will be filled by elected lawmakers; proportional representatives will occupy the rest. As of Monday, the Minjoo Party has fielded candidates in 150 districts.

In 56 other areas, primaries were scheduled.

Of those whose nominations were finalized, only about 40 were considered Roh loyalists. Many new faces, including high-profile candidates recruited by Moon before he resigned from the chairmanship, were assigned to run in easy-to-win districts.

Renowned criminal psychologist Pyo Chang-won was named to run in the Yongin D District. Yang Hyung-ja, Samsung Electronics’ first female executive, was selected to run in Gwangju’s Seo B District, where she will face Rep. Chun Jung-bae, co-chairman of the People’s Party and a political veteran.

It remains to be seen if the nomination experiment of the Minjoo Party, focused on changing the perception that it is under the control of Roh loyalists, will succeed.

Last week, the party announced it will not give the nomination to Rep. Jung Cheong-rae, a hard-line Roh loyalist famous for his harsh rhetoric and a two-term lawmaker currently representing Seoul’s Mapo B District.

At the time, the party said that opinion polls in Jung’s district were favorable toward him, but that his penchant for courting controversy had become a liability. “He is talented, but his extreme expressions are worrying,” said Hong Chang-san, the nomination committee chairman. “We learned that the people now have different, stronger standards.”

Jung, a former student activist, has fixed support among liberals. However, last year he was punished by the party’s ethics tribunal for his harsh criticism of one fellow lawmaker.

Surprisingly, the party’s approval ratings plunged after the recent decision not to nominate Jung.

The Minjoo Party recorded 31.6 percent support in a Realmeter poll on Wednesday but fell to 27.4 percent the next day, after the party announced his elimination. By Friday, it fell to 26.1 percent.

“The Minjoo Party’s progressive supporters were disappointed by the decision and consequently left for the Justice Party,” said Kwon Soon-jung, head of the opinion poll department at Realmeter. “It shows that by eliminating Roh loyalists, the Minjoo Party is losing some of its supporters.”

As nominations continued on Monday, the prospect of a pre-election merger between the Minjoo Party and People’s Party faded further away.

The Minjoo Party nominated candidates to districts currently represented by People’s Party lawmakers, indicating that it will no longer wait for them to join.

The People’s Party also announced its nominations of key members without primaries. Co-chairmen Ahn Cheol-soo and Chun Jung-bae will run in their current districts, as will Rep. Kim Han-gill, Park Joo-sun and Park Jie-won.