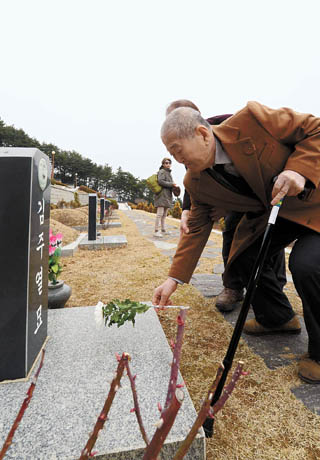 Kim Deok-mo, 76, driver of the car that carried the body of Kim Ju-yeol, a student activist whose death in 1960 incited nationwide protests and brought an end to Syngman Rhee’s rule, places a flower at the activist’s grave in South Gyeongsang.[KYUNGNAM DOMIN ILBO]

For 56 years, Kim Deok-mo had carried the weight of an apology that had long gone undelivered.

But on Sunday, he finally got the chance to ask for forgiveness.

Kneeling before the grave of Kim Ju-yeol, a student activist killed in a March 15, 1960 rally protesting the rigged election of President Syngman Rhee, the man seemed at a loss for words. “I am sorry,” he repeated over and over. “Please forgive me.”

Kim Ju-yeol was 15 years old at the time of his death on March 15, but he remained missing for nearly a month, until his body was discovered on April 11, floating near Masan Port.

He had a tear gas bomb stuck in one of his eye sockets, and a photograph of his body went on to circulate widely in local media, inciting angry uprisings in Masan, South Gyeongsang.

Masan’s movements spread throughout the country, resulting in the April 19 Revolution, a nationwide movement to protest police violence and request free and fair elections. The movement put a stop to Rhee’s rule.

Police at the time lacked vehicles and often hired hands, like Kim, then 20, to drive. After finishing middle school, Kim made a living as a chauffeur, driving a vehicle similar in build to a Jeep Wrangler.

On March 16, 1960, Kim Deok-mo was asked by police to drive up to the Masan branch office of the National Tax Service. Just a day prior, he had been tasked with driving Masan Police Lieutenant Park Jong-pyo - the man who killed Kim Ju-yeol with a tear gas bomb at the rally minutes before.

Park came across Kim Ju-yeol’s body in Namjeon, Masan, at 10 p.m. on March 15, and called Kim to drive up to the Masan branch office of the National Tax Service to carry the corpse in the early morning hours of March 16.

That’s when Kim Deok-mo saw the boy for the first time. He was shocked when he approached the body, which had been laid next to a trifoliate orange tree near the office, but he was helpless to do anything about it, he said.

Lieutenant Park, two more police officials and one civilian carried the teenager’s body to Kim’s car. They initially intended to bury the corpse on a mountain, but they changed their plan on the way, commanding Kim Deok-mo to head to Masan Port, which is known today as the location of the annual Masan Gagopa Chrysanthemum Festival held in the fall.

The four tied heavy stones to Kim’s body using steel wire and threw him out to the sea.

But the wires must have come undone, as Kim’s body later floated up near the port. The subsequent photographs of his face - still punctured by the tear gas canister - sent a ripple effect of shock and anger nationwide.

Masan held three days of mass rallies, after which thousands of students marched from Korea University to the presidential office on April 19, their numbers snowballing to more than 100,000.

Violent clashes with police ensued and Rhee declared martial law. Then, on April 25, 1960, university professors and other citizens joined the students. As the number of protesters continued to increase, Rhee stepped down from office on April 26, in a revolution that effectively ended his 12-year rule.

But Kim could never shake that feeling of guilt. He said he converted to Catholicism with the hope of washing away his wrongdoing.

Then, on Oct. 9, he found by chance an opportunity to come forth when he heard a radio show broadcasting an event organized by the Kim Ju-yeol Memorial Foundation. In discussing his intention with the foundation, he decided to give a public apology.

“I feel much less burdened after giving a forthright apology,” Kim told the public at the National March 15 Democratic Uprising Cemetery at Masanhoewon District, Changwon, South Gyeongsang. “Nothing can make right what happened, but I truly hope Kim is happy in heaven.”