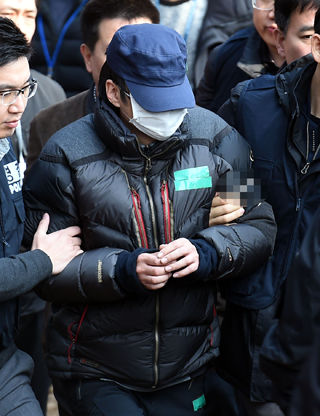 The father of Shin Won-yeong, 7, is led away Monday after a re-enactment. [NEWSIS]

The parents of 7-year-old Shin Won-yeong re-enacted Monday how they are alleged to have abused their son inside the bathroom of their house in Pyongtaek, Gyeonggi, before his untimely death last month.

The boy’s stepmother, surnamed Kim, told police that she had locked him in the bathroom on Feb. 1 over her frustration that the boy was not properly potty-trained. She then stripped him of his clothes and doused him in cold water, locking him in the bathroom overnight. The couple found him dead the next day.

Police are considering murder charges for the couple and are expected to file charges to the prosecution on Wednesday.

The 7-year-old’s elementary school alerted police when the boy did not show up at the start of first grade.

This is just one in a series of child abuse cases to be unearthed since the government opened an investigation last year into missing children.

The probe began when an 11-year-old girl appeared barefoot in Incheon last December after having escaped her house and her parents, who starved her for two years. Since then, the remains of a 7-year-old boy was found in his parents’ freezer in January, years after he had stopped attending school, as well as the mummified remains of a 13-year-old girl, found in February in her parents’ house.

Most of the parents involved in such cases, experts say, are typically isolated from the community and suffer from depression or other psychological conditions.

Kim Yoo-kyung, a pseudonym for a 41-year-old woman who drowned her 2-month-old baby in a stew pot last September, reportedly suffered from postpartum depression, a personality disorder that had resulted from brain damage that made it difficult for her to control her impulses, as well as hepatitis B.

Photographs from Kim’s house at the time show diaper bundles cluttered throughout the house, with towels strewn on top of a baby stroller sitting among misaligned furniture.

She told police she killed her daughter because she felt she was the only one taking care of the baby at home while her husband worked. When she threatened to leave one morning in September, her husband told her that he would place their daughter in an orphanage if she left.

Kim killed her daughter after he left for work that day. She was charged with murder in November and sentenced to 12 years in prison.

Free counseling services for postpartum depression are available at community health centers nationwide, though experts say most parents who are socially isolated likely aren’t aware or don’t know how to access these resources.

“When impulse control disorders or depression hits a parent while he or she is rearing a child alone, it often leads to reckless and irresponsible actions,” said Park Yong-cheon, a professor in the Mental Health Department at Hanyang University. “It is important to find potential risk factors to care for them beforehand.”

Police said their Citizen Report smartphone app allows users to report on child abuse. Once a report is made, police will commence investigations immediately.