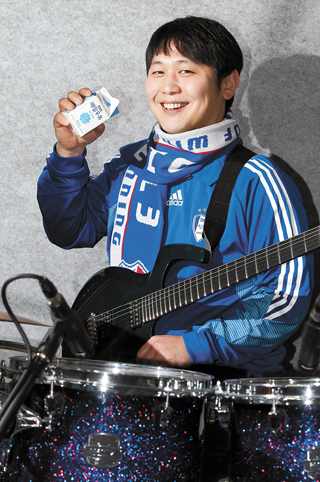 And one fan has come up with a unique idea that might provide his cherished team with financial stability and help unite the club’s fan base through a nutritious refreshment.

Indie rock band leader Kim Jin-young has been drinking milk every day lately. And he is asking his band members and their acquaintances and fans of his beloved Suwon Samsung Bluewings to drink as much Maeil Dairies milk as possible, because they sponsor the Bluewings in the K-League. The theory is simple: show support for Maeil and they will continue to support the Bluewings.

Kim started the campaign, titled “If you are a Suwon fan, drink milk every day.” He hopes the campaign will grow like the “ice bucket challenge” that went viral worldwide to raise awareness and donations for the disease amyotrophic lateral sclerosis (ALS).

In Kim’s campaign, a person is asked to take a photo of themselves drinking milk produced from one of the biggest dairy companies in Korea, post the photo in a social media page and nominate three others to take part in the campaign. Less than a month after its launch, the campaign caught on with the club’s fans and hundreds took part in the indirect fundraising initiative.

At the moment, due to the extended economic downturn, corporate-owned clubs are unable to obtain as much financial support as before from the South Korean conglomerates. With money in short supply, teams were left with no choice but to cut their budget, specifically on players’ transfer fees and salaries. On top of the domestic predicament, big-spending Chinese clubs are pulling star K-League players out of Korea with big contracts, making it almost impossible for local teams to compete.

Fans are aware of the dilemma and some decided to come up with initiatives to help save their favorite clubs.

There are some success stories from overseas where ‘social fundraising’ initiatives by fans have helped save teams from financial difficulties.

For example, in 1984, when S.S.C. Napoli of Serie A in the Italian football league tried to bring Diego Maradona from F.C. Barcelona, it was a donation from Napoli fans that helped the team come up with the necessary capital. Napoli was unable to amass the 9.6 million dollar transfer fee - the highest in the world at the time - and fans paid out of their own pockets to make up for the difference.

Because of the fans’ efforts, Napoli was also able to send a chartered plane to Argentina to bring the superstar to Italy. And with the Argentinian leading the team, Napoli claimed its first regular season title and FA Cup title in 1987. In 1989, Napoli also climbed to the top of the UEFA Champions League.

Similar stories can be found in Germany, where fans from FC Cologne in the Bundesliga brought home their star striker with money collected through a “beer campaign.” When their ace attacker Lukas Podolski was left to warm the bench after his transfer to FC Bayern Munich, fans organized a fundraiser in 2009 to bring him back to his old stomping ground by leasing him from Munich. In the “beer campaign,” fans donated a random amount every time they drank beer.

In case of FC Kaiserslautern, after the team was relegated to the Bundesliga second division in 1996, the club’s fans raised money to hire Otto Rehhagel, one of the most celebrated managers in football at the time. With Rehhagel as the skipper, Kaiserslautern returned to the first division of the Bundesliga in 1997 and won the league title in 1998.

There is even an incident where supporters bought out a team. The Pompey Supporters Trust (PST), supporters group for Portsmouth F.C in the English Premier League, took things in their own hands after the team was demoted while suffering financial debt. PST eventually won its bid to buy the club and took over the ownership in Apr. 2013. The club became debt free in Sept. 2014 after raising money through various means including individual pledges.

Suwon manager Seo Jeong-won said, “It is fascinating to see the social fundraising initiatives that could previously only be seen in Europe now here in the K-League. I cannot express my appreciation enough to the fans. I hope the campaign by the Suwon fans becomes a success and streamlines communication and the rapport between the fans and the club.”