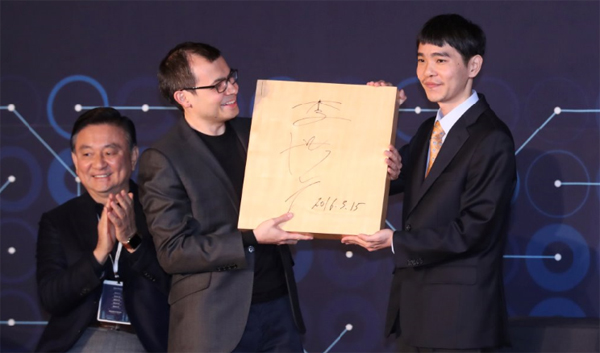 World Go champion Lee Se-dol, right, and Demis Hassabis, founder and CEO of the Google-acquired British start-up DeepMind, middle, hold up Lee’s autograph engraved on a Go board at a press conference after the fifth and last game on Tuesday evening at the Four Seasons Hotel in Gwanghwamun, central Seoul. Hong Seok-hyun, chairman of the Korea Baduk Association and the JoongAng Media Network, granted an “honorary 9-dan” certificate to AlphaGo. [YANG GWANG-SAM]

The event wrapped up at 6 p.m. - five hours after the beginning and well beyond the four-hour limit - as the Korean Go master gave up after his 280th move.

“It’s a shame that I could not be successful at the end,” Lee said at a postgame press conference at the Four Seasons Hotel in central Seoul. “I thought I was taking the initiative at the beginning, but I was defeated regardless. It seems to have revealed my deficiency once again.”

“What an incredible match that was,” said Demis Hassabis, founder and CEO of the Google-acquired British start-up DeepMind. “It was the most exciting and stressful one for us of all the matches.”

Lee beat AlphaGo in the fourth game on Sunday - after effectively losing the tournament with his third loss on Saturday - and hopes were high that he would again find flaws in the performance of the machine and restore human pride through a victory on Tuesday.

That was not to be.

The press conference on Tuesday was packed with more reporters than after any of the previous four games. A number of Chinese reporters filled the room, reflecting the intense attention to the “Google DeepMind Challenge Match” from the homeland of the ancient board game.

The 33-year-old guru of Go, or baduk in Korean, went on to say the five-day tournament was an inspirational experience that gave him new light on the game.

“At one point, I came to have this question about whether I was truly enjoying Go, and I found myself enjoying it to the fullest during the match,” he said. “Watching AlphaGo play, I came to another question: whether what we used to know about Go was really right. I think I need to study this further.”

He does not consider AlphaGo “a player,” the master said philosophically, and it is still at a level that can be challenged by humans.

Kim Seong-ryong, a 9-dan professional Go player who served as a Korean commentator in the press room, said he was amazed that Lee deployed a different strategy on Tuesday than in the fourth game, reversing many experts’ expectations.

“I admire his adventurer spirit,” he said.

Lee launched the initial move with a black stone on the upper-right corner of the 19-by-19 grid at 1 p.m. The Korean baduk master entered into byoyomi, a Japanese word for extensions, at 4:40 p.m. after using up his two hours. His opponent had 22 minutes left at the moment and followed suit to use byoyomi at 5:26 p.m.

The game was the longest of the five matches, as Lee continued to place stones even though he - and many others - could see the game wasn’t going well for him.

Lee accomplished his victory against the machine in the fourth game with white stones, and he expressed the desire to win in the fifth game with black stones, which he said would be more “meaningful.”

The five-day “grand challenge” followed Chinese Go rules, and experts’ analysis of the games so far has shown that the player with the white stones seemed to have an advantage.

When black gets to move first and takes the initiative, white is usually considered at a disadvantage. But in return, white is granted seven and a half points, or the number of corners surrounded by white stones, from the beginning. (The bigger the number of corners occupied, the higher the chance of winning gets.) The points were a substantial head start for AlphaGo, which meant Lee went into the final match with something of a handicap.

Following the press conference, the Korea Baduk Association granted AlphaGo an “honorary 9-dan” certificate in a ceremony. DeepMind CEO and founder Demis Hassabis, on behalf of his creation, received a bilingual testimonial from Hong Seok-hyun, chairman of the association and the JoongAng Media Network.