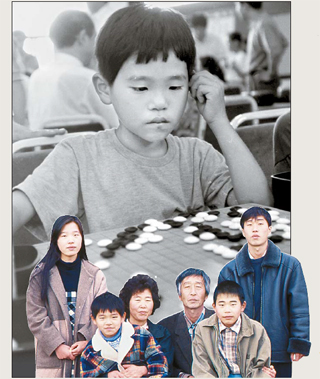 Top: An 8-year-old Lee Se-dol participates in a state Go tournament involving Korea, China and Japan in 1991.Above: A family photograph taken in 1995 shows Lee’s family on Bigeum Island in South Jeolla, where Lee spent his childhood. From left: Lee Se-na, his second-oldest sister; Lee Se-dol; his mother Park Yang-rae; his father Lee Soo-oh; his second-oldest brother Lee Cha-dol; and his oldest brother Lee Sang-hoon. Lee Sang-hee, the oldest sister of the siblings, is not pictured. [KOREA BADUK ASSOCIATION]

One of the world’s most renowned players, his name was the No. 1 most-searched keyword Tuesday among single men and women on Naver, Korea’s top portal site.

Yet their focus appeared not to be on the tournament itself, but on Lee as a person.

“It’s not that a human has lost; Lee Se-dol has lost,” the 33-year-old Go champ told reporters after his third loss Saturday against the AI program.

When his friends visited him that night, they said they never heard Lee utter anything close to “I’m tired.” Instead, they found him repeating the moves of the past three games.

“Lee is set on playing his own game,” asserted Kim Seong-ryong, who, like his contemporary, is also a 9-dan Go player.

Lee’s trademark honesty and his doggedness for the game of Go, also known in Korea as baduk, is nothing new to the people who have watched him throughout his childhood and professional career.

So to get an idea for how Lee Se-dol came to be where he is today, the JoongAng Ilbo spoke with some of his earliest teachers and contemporaries.

“From a young age, Se-dol showed signs of genius in games when it came down to putting up a fight to win,” said Kwon Gap-yong, an 8-dan Go player who mentored Lee when he was just 8 years old. “His specialty was always a fierce and unrelenting fight.”

Kwon took the young Go player under his wing in 1991, when the two met at the 12th National Children Go Competition, hosted by Haitai Confectionery and Foods Company. At the time, Lee was the youngest player to win in the game.

It was also the first time he had left his home on Bigeum Island in Sinan, Mokpo, South Jeolla. As the youngest of five children, Lee learned to play Go from his father, an amateur but avid 5-dan player.

When Lee left for Seoul in 1991, his carefree personality from having grown up by the sea remained constant. Kwon recalled that Lee was once caught drinking with an older player at Kwon’s house.

Lee became a professional at 12, the third-youngest player after Jo Hoon-hyun, who joined the professional Go community at 9 years old, and Lee Chang-ho at age 11.

Soon after being promoted from amateur status, he suffered from severe stress that led to temporary aphasia, a loss of the ability to use or understand words that can sometimes be caused by strokes or seizures.

He also developed a bronchial inflammation at the time. Yet with his parents back in Sinan, and his older brother in the Army, medical treatment was delayed and his bronchial nerves became permanently paralyzed, resulting in his distinct voice today.

Professional Go players who have watched Lee grow up say he was not a particularly strong player until his father’s death when he was 15.

“His style of Go changed after his father passed away,” Kim said. “It became more dogged and powerful.”

Afterward, Lee swept competitions in and outside Korea to become the country’s No. 1 world champion, succeeding Lee Chang-ho, a 9-dan player and 16-year world champion.

But his status didn’t mean much to him when it came to understanding the moves of each game. According to his friends, Lee has never stepped away from a game before he has understood every single one.

“One time, he and I drank together until 2 in the morning, but he went back to a game he had won and repeated every single move because he said there was one move he didn’t understand,” said Kim Ji-yeong, a Baduk TV anchor.

Lee replayed his and AlphaGo’s moves after his second and third defeats, too, with players including Hong Min-pyo, Park Jung-sang, Han Jong-jin and Yang Geon.

Yet, to his closest family, he is simply a good father, husband and younger brother.

The Go hero’s biggest joy in his life is undoubtedly his only daughter, Lee Hye-rim, now 10. That likely explains his 2013 slump, when his wife and daughter left for Canada so Hye-rim could attend school.

When the JoongAng Ilbo mentioned to Lee’s older sister, Lee Se-na, how many people were taken by the Go champ’s succinct and confident commentary during press conferences, she just laughed. “Well, yes, he does watch a lot of martial arts movies at home,” she replied. “Maybe that’s where he gets it.”