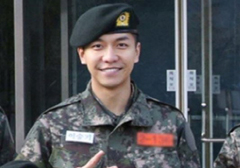 Lee Seung-gi, a popular singer now serving in the Army, has finished training and been deployed to the Special Warfare Command.

After finishing a six-week new-recruit training session at the Korea Army Training Center in Nonsan, South Chungcheong, the rookie soldier on Wednesday joined a unit of the Special Warfare Command. Lee reportedly finished training with high marks and was the top individual in his squadron.

Before enlisting in the Army on Feb. 1, Lee released a series of songs and music videos, starting with “I Am Going to the Military.”

On March 3, the singer released the track “Meet Someone Like Me,” written by international K-pop star Psy.

With Lee slated to be out of the spotlight during his military tenure, the music video for the song showed his preparations for the Army and his past activities.