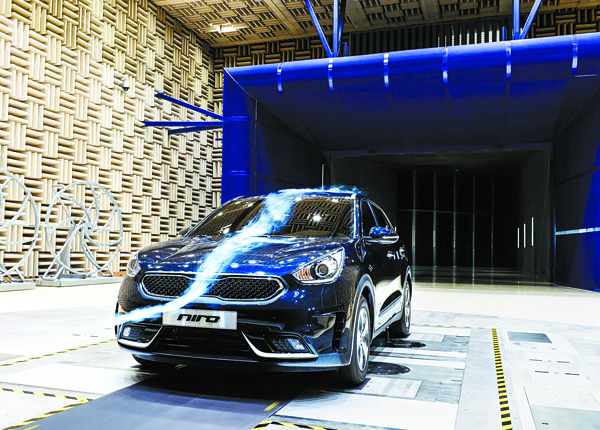 HWASEONG, Gyeonggi - Kia Motors on Wednesday gave a minutes-long glimpse of the Niro, the first Korean SUV solely developed as a hybrid vehicle.

The small SUV completes the company’s SUV lineup, along with the Sportage (mid-size), Sorento (large) and Mohave (full-size), to compete in one of the toughest segments in the local market.

A media preview of the vehicle at the Namyang R&D center in Hwaseong, Gyeonggi, lasted for about 30 minutes, with the company taking up 10 minutes to compare the price options with its competition. 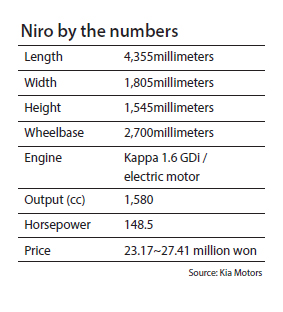 Kia hopes to attract consumers in the small SUV segment that is currently led by rivals such as the QM3 (Renault Samsung Motors), Tivoli (Ssangyong Motor) and Trax (GM Korea).

Seo Bo-won, domestic marketing director of Kia, described Niro as the most cost-effective car that offers the best performance and price options in the segment. The company said it will start selling the car later this month, adding that it is currently receiving preorders.

“We can proudly say that the Niro has the best small SUV features that provide good economic efficiency,” Seo said.

Comparing the Niro with other compact SUVs currently on sale, Kia said the challenge was to attract young consumers in their 20s and 30s.

The competition in the small SUV segment is expected to get tougher this year as more than 150,000 cars are predicted to be sold, up from last year’s 88,659 units, which was also up by 195 percent from 2014, according to industry data.

The Niro’s sticker price for its luxury trim is 23.17 million won ($19,440), about 700,000 won more expensive than the Tivoli diesel VX. But the company said consumers can purchase the Niro at 1.7 million won cheaper than the Tivoli, as the hybrid car gets tax reductions and 1 million won of government subsidy.

“Considering this is a hybrid, it saves more fuel money than other SUVs as well,” Seo said. The company did not reveal the Niro’s fuel efficiency.

The Niro is developed with a new Kappa 1.6 GDI engine and a 32-kilowatt electric motor that provides 141 horsepower. It has a new six-speed dual clutch transmission, which the automaker said it developed only for the hybrid SUV. The company will also offer a series of options, including a 10-year or 200,000-kilometer (124,000-mile) warranty that replaces hybrid parts including an electric motor. It also replaces the car battery for free and offers a program that exchanges the Niro with a new Kia SUV within 30 days if a customer is not satisfied with the hybrid car.

Kia did not reveal its sales goal for the Niro but said it expects the hybrid SUV to lead the market in the segment. Ssangyong Motor, which was the best-seller in the small SUV market in Korea, sold 45,021 units of the Tivoli last year.

“After launching the Niro successfully in Korea, we will bring this to the global market,” said Jung Rag, executive vice president of Kia. “We aim to be the No. 2 seller in the small SUV segment globally by 2020.”