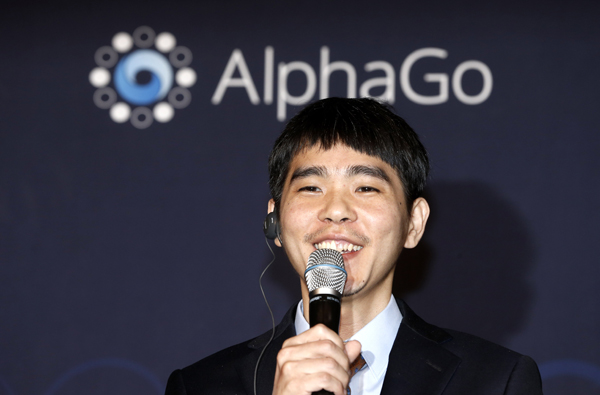 Lee Se-dol speaks at a press conference at the Four Seasons Hotel in central Seoul on Tuesday after his 4-1 defeat in a five-match series with Google DeepMind’s AlphaGo.


The Go match between master Lee Se-dol and Google computer program AlphaGo held in Seoul was a battle of the century that marked the beginning of the fourth industrial revolution.

It was a shock to all of us when the Go world champion resigned in the first match. The following two losses left us astonished, even scared, at AlphaGo’s learning capabilities.

Only when Lee tenaciously persevered to claim his first victory in the fourth match could we finally let out a sigh of relief.

The struggle between Lee and AlphaGo has brewed a definite fear as we wonder how artificial intelligence (AI) will evolve among humans. It was also a blow for the entire Korean nation, which prides itself in IT supremacy, to reflect on the alarming level of complacency in Korea’s IT capabilities.

Now that the battle between Lee and AlphaGo is over, it is time for us to look back at the five-game match and think about what AlphaGo’s victory means for Korea’s future.

The first lesson from AlphaGo’s wins is that the most talented individuals can accomplish the most unimaginable results when given a high level of investment and the best environment that nurtures their challenge-seeking nature.

Google has been known to attract the world’s best engineers by providing them with the most free environment for research and development. Thus, we should revisit our corporate culture and how we cultivate talent.

Given that Korea has a smaller talent pool in AI than in the United States and China, it is urgent that we make a continuous investment in tailoring our corporate culture and environment to fit the needs of top talents. Creating a corporate culture that encourages high-potential talents to take bigger risks may be time-consuming, but nevertheless, it is a task that should never be abandoned.

Secondly, we learned that there needs to be more public discussion on developing “Korean” AI that is differentiated from the current AI approach. AI still does not feel human emotions - over the past few days, the world did not tune in to the Go match for AlphaGo’s robotic pop-up screen notices, but to grasp every moment of Lee’s most humane emotions. In the future, one of the biggest challenges in AI development will be to preserve human emotions.

Without question, it would be a tough task for Korea to begin racing after other AI-advanced countries in the same lane. Instead, we must shift lanes in order to see farther. What would it mean to “shift lanes?” What if we widen our focus on AI to embrace the problems in society such as low birthrate, an aging society, low economic growth and bipolarization? Wouldn’t such a shift in focus enable us to develop a form of AI that digs through the hearts of issues to find rightful solutions?

Furthermore, it is also important that we keep up with constructive discussions on how AI technology will affect the future. Controversy over the fairness of the match between Lee and AlphaGo implies that the advancement of AI brings a complex system that further obscures the decision-making process between human-to-machine and machine-to-machine relationships. Hence, an optimum point must be found between the benefits and potential risks of AI on technological, economic, moral and legal grounds in order to administer responsibility and conflicts in due means. An open discussion that encourages all different perspectives from various stakeholders must take place.

Leading nations and global companies are already actively discussing the future vision and governance of technological innovation that has been brought to the table by the fourth industrial revolution. If we do not want AI to drive us to dystopia, now is the time to think of a “wise move” that combines mechanic rationality and human creativity, as the duty of a leading IT country.


*The author is the managing director of FleishmanHillard Korea.