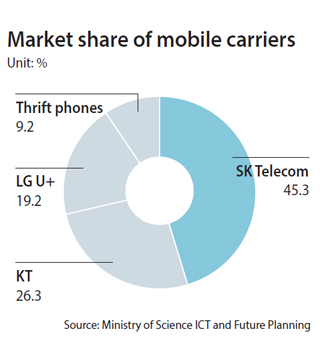 The country’s three leading mobile carriers will pay a total of 267 billion won ($229 million) worth of compensation to millions of customers for exaggerated and misinformed advertisements.

According to the Fair Trade Commission (FTC) on Thursday, this is the first time companies that have committed unfair business practices will compensate affected parties directly. In previous cases, offending companies paid penalties to the government, while affected parties had to pursue legal actions for compensation.

Between 2013 and 2015, SK Telecom, KT and LG U+ advertised their services describing them as “unlimited” when, in fact, some of the billing services offered only partially limited access to data, voice calls and text messaging, the antitrust agency said. The carriers failed to mention the limitations and therefore misinformed customers.

In most examples, the data speed provided by the carrier dropped significantly or additional charges were levied if a subscriber exceeded a certain amount of monthly data use.

In October last year, the companies requested a consent order from the FTC. The order is basically an agreement with the commission that allows offending companies to voluntarily come up with corrective measures, including compensation and measures to prevent wrongful practices.

This allows the case to be closed without any legal action, and compensation can be made to affected customers sooner.

“This is the first time a consent order has been practiced,” an FTC official said. “We expect the swift and practical action will further contribute to protecting the rights of consumers.”

The three carriers agreed to give out 1- to 2-gigabyte LTE data coupons to 7.4 million subscribers, as well as 30 to 60 minutes of free voice calls to 25 million users who subscribed to unlimited voice calls. In addition, SK Telecom and KT will be refunding additional charges that they made on subscribers when they exceeded the limited text messaging and voice calls. This is estimated to be worth about 800 million won.

The total compensation that the three mobile carriers have agreed to pay is estimated to be worth 267 billion won, with the LTE data coupons alone accounting for nearly half, at 136.2 billion won.

Customers will be given until April 26 to accept the compensation proposed by the companies. The compensation itself is expected to take place between June and July.

The FTC said it will continue to monitor the mobile carriers to ensure they keep to the agreement. If not, the FTC will charge a penalty of 2 million won or less for each day the agreement is not fulfilled.