Saenuri in convulsions over April nominations

Saenuri in convulsions over April nominations 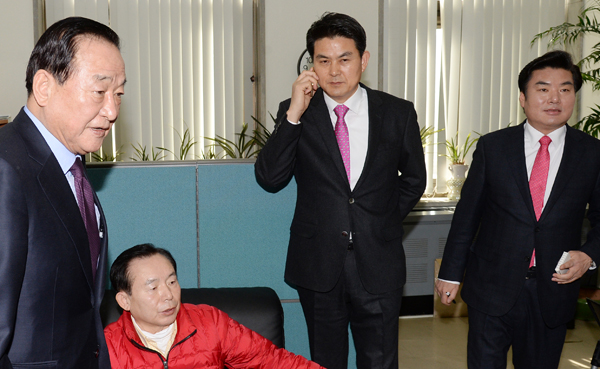 The schism in the ruling party between loyalists of President Park Geun-hye and her adversaries widened to a chasm on Thursday, as they battled over nominations for the April 13 general election.

Chairman Kim Moo-sung of the Saenuri Party canceled a routine Supreme Council meeting scheduled for Thursday morning to protest the nomination committee’s decision to deny candidacies to key opponents of Park. The move was Kim’s latest challenge to the nomination committee, headed by Lee Han-koo, a Park ally. On Wednesday, Kim hosted a press conference and publicly questioned the integrity of the nomination process.

Kim’s demand on Wednesday for some controversial nominations to be reconsidered, however, was rejected immediately.

“He is talking like a fool,” Lee said only minutes after Kim’s announcement.

At a press conference later, Kim Moo-sung was criticized for questioning the integrity of some nominations on Wednesday. The Park loyalists also said canceling the routine Supreme Council meeting was an obvious obstruction of the nomination process.

At the press conference, Won demanded Kim apologize for his behavior.

Kim refused. “That is nothing to apologize for,” Kim told journalists.

Rep. Kim Yong-tae, head of the Saenuri Party’s Seoul chapter and an adversary of Park, supported the chairman. He held a press conference and demanded that a general assembly of lawmakers be held to discuss the nominations.

“The ongoing nomination process, which completely ignored the party’s constitution and regulations, is invalid,” he said. “Chairman Kim must never accept the selections.”

Rumors spread last month about a “hit list” of Park adversaries who would be denied nominations. Kim Yong-tae, a 47-year-old two-term lawmaker representing Seoul’s Yangcheon B District, was reportedly on the list. And yet, he was actually given a nomination.

In another apparent attempt to undermine the chairman, Won Yoo-chul also told reporters that the party is considering appointing a liberal economic czar, Kang Bong-kyun, to lead its election campaign. Although the plan was discussed with Kim, it is rare for the floor leader to bypass the chairman to make such an important and surprising revelation.

Kang, 72, is a technocrat-turned-politician. The North Jeolla native started his career as a public servant in 1969 and served in various economic ministries. He served as the information and communications minister and finance minister in the liberal Kim Dae-jung administration. He also served as the policy planning senior secretary and economic senior secretary under Kim Dae-jung.

He won his first term in the National Assembly in a by-election in 2002 and won two more terms under the Uri Party ticket. He also created presidential pledges for Roh Moo-hyun’s campaign in 2002. During the 2012 presidential election, he supported the short-lived presidential ambition of Ahn Cheol-soo.

Kang reportedly is considering the proposal.

The conservative Saenuri Party is obviously stealing a page from the book of the opposition Minjoo Party of Korea. The Minjoo Party recruited Kim Chong-in, the author of President Park’s 2012 campaign pledges on economic democracy, to lead its campaign.

As the turmoil continued, lawmakers who were dropped by the nomination committee are leaving the party. Rep. Chin Young, a three-term lawmaker, left the Saenuri Party on Thursday to run independently.

“I worked passionately, but all I got was bitter retaliation,” Chin said. “I am leaving the party that I served for 20 years.”

Chin served as Park’s first welfare minister but resigned from the post after a conflict with Park over implementing her pledge of basic pensions for senior citizens.

More high-profile politicians, including Reps. Lee Jae-oh and Cho Hae-jin, are expected to leave. Cho said there is a possibility that the former Saenuri Party candidates may form an independent alliance.

The worst of the storm, however, is yet to come, as the nomination committee is still deciding the fate of Rep. Yoo Seong-min.

Yoo, a three-term lawmaker and former floor leader of the ruling party, was once an ally of Park, but the two parted bitterly last year after she publicly condemned him for “politics of betrayal.” Park loyalists have consistently argued that Yoo and his associates have a different philosophy and political identity from the Saenuri Party.

While Yoo’s ordeal continues, his popularity has skyrocketed. According to a Realmeter poll announced Thursday, Yoo was ranked second in a list of potential presidential contenders in the Saenuri Party, following the front-runner, Chairman Kim, within the margin of error.