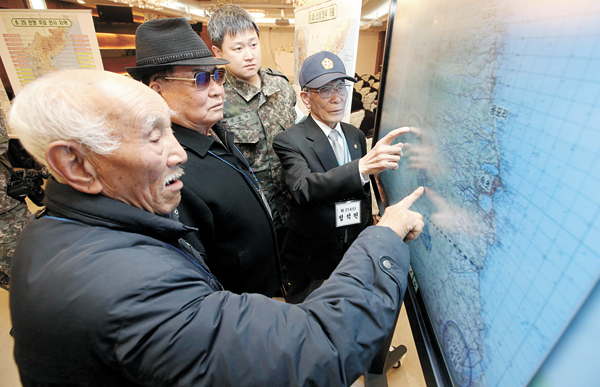 Korean War (1950-53) veterans point to a map, recalling battle locations. The Defense Ministry Thursday gathered in Busan 80 Korean veterans to hear their testimonies and recollections, hoping to locate the remains of soldiers who died in the war. [SONG BONG-GEUN]

In an effort by the Ministry of Defense to locate and retrieve the remains of some 124,000 Korean soldiers still buried in the wild in Korea, 80 Korean veterans relived their memories of the Korean War in front of cameras on Thursday at a gathering in Busan.

The Defense Ministry asked the veterans, whose average age is 85, and who live in Busan and South Gyeongsang, to recall the times they last saw their closest comrades in battle and to point out the locations on maps. The ministry intends to use the footage to locate soldiers still buried in the wild.

The Defense Ministry’s excavation project began in 2004, and it commits 100,000 people annually to the task of locating and excavating the remains of soldiers who died in the Korean War (1950-1953). This year’s excavation will be held from March to November.

A total of 9,100 soldiers’ remains have been excavated since 2004, but only 109 were able to be identified and returned to their families.

The Defense Ministry suspects that about 40,000 out of some 124,000 soldiers still lost are buried in the demilitarized zone and in North Korea.

Despite the almost seven decades spanning the time between the war and now, memories of the battles became more marked as the veterans spoke.

“The sound of a whistle broke through the storm on July 13, 1953,” began Cho Gyu-nam, an 83-year-old veteran, pulling the audience into the battle of Yeomun-ri, otherwise known as the Geumseong Battle.

“A cannonball of the Chinese Communist army fell on the trench where I and Staff Sgt. Ahn Eun-joon were. When Ahn died there wasn’t much I could do… As I ran through the flooded Geumseong stream, the cries of soldiers around me filled my ears. They were louder than the cannon fires.

“I always regretted not bringing Ahn’s body with me. If I could only see him, even his remains…” Cho finished his story in tears.

Cho joined the Army in 1950, at the age of 17. He fought in anti-guerrilla battles in Jeolla and battles to recapture Mount Sorak. Yeomun-ri battle was one of the last battles of the war.

The Defense Ministry records that 134 Korean soldiers died in the Yeomun-ri battles.

“Please bring back our comrades, who have been waiting for us to come find them for the past 64 years,” said 83-year-old veteran Kim Gwang-bin, who was 17 when he fought in the Battle of Sniper Ridge in 1952. “Thousands of soldiers were killed at Hill 598, but with so many incessant attacks and retreats we just couldn’t bring back all our fellow soldiers.”

“We’ll try our best to bring back every last man,” said Lee Hak-gi, director of the excavations project. “These men gave their lives for the country we now have today.”